Our beloved Walt Mossberg is loving the new version of Office for Mac, dubbed “2011” and dropping on October 26th. Particularly, he seems to be liking the new Outlook a lot:

I was able to import a nearly 3-gigabyte Windows Outlook data file with no problems. And I was able to easily and perfectly import all my messages and settings from Apple’s own built-in Mail program and to sync with Apple’s (AAPL) built-in Mac address book. But Microsoft is still working on syncing with Apple’s iCal calendar program, and the Outlook calendar can’t sync with Google Calendar. Also, while the new Mac Outlook can import Windows Outlook data, it can’t export its data to Windows yet. Microsoft says it is also working on that.

In general, Outlook on the Mac proved fast and capable in my tests. It doesn’t work exactly like its Windows counterpart, but Windows users will find it very similar. And it has some Mac-specific features. For instance, its contents can be easily searched by the Mac’s built-in universal search feature, Spotlight, and can be backed up by the Mac’s Time Machine backup system.

Microsoft’s new Mac Office is by far the best Mac version of the suite I’ve used, and I can recommend it. 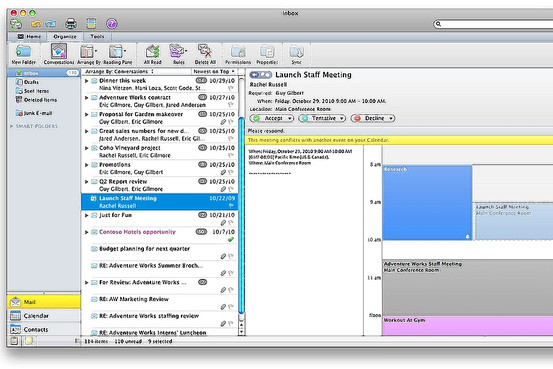 For as much as I understand the needs of companies willing to use Macs, but stuck on Office, there’s no way I’m giving up on Mail for when it comes to desktop email. I’ll give it a try, though.