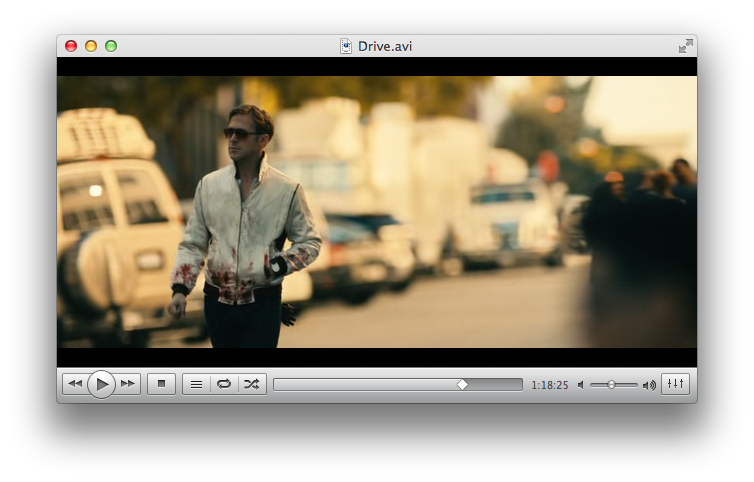 Back in February 2010, I wrote a post for MacStories about Lunettes, a codename of a new interface for VideoLAN’s popular media player VLC. Back then, I used to spend a good portion of my days fiddling with media players and skins for VLC, which I used to access a well-organized media library on my MacBook Pro and various external hard drives. Lunettes was promising, and it proved that VLC could have an interface design more suitable for the needs of the Mac community. I didn’t know, however, that work on the next major version of VLC, VLC 2.0, had already begun in 2008 with the first concepts and technical drafts, with Lunettes being the complete rewrite of the application that stemmed  from that original vision that eventually led to VLC version 2.0, released today.

Available for Mac, Windows, and Linux machines, VLC 2.0 is a major update that brings several new optimizations on the technical side, new features, and a brand-new Mac interface that we’ve already covered here on MacStories. It can be downloaded for free from VideoLAN’s website.

Often regarded as “the media player that can open almost anything”, VLC has indeed become many’s de-facto choice over the years when it comes to dealing with a variety of video file formats, or audio files that other media players such as iTunes won’t open. If you weren’t aware of all its functionalities and secrets, you’d say VLC’s best feat is the fact that it can launch almost any kind of file you throw at it. From the strong foundation of VLC 1.x, VLC 2.0 introduces support for new formats – as well as enhancements and fixes for the currently supported ones – with better handling of H.264, MPEG-4/Xvid and WebM thanks to multi-threaded decoding, support for 10bits codes and WMV image, completely rewritten support for images, changes in RealVideo and Real Format integration, correct support for FLAC, RV and Hi10p in MKV, and a plethora of other minor adjustments and refinements that contribute to making VLC one of the most (if not the most) versatile and customizable media players around. For instance, professional users will find support for ProRes 422 and 4444, AVC/Intra, Jpeg-2000 and DNxHD/VC-3 in 10bits and a new, faster Dirac/VC-2 encoder, whilst anime fans will be pleased to know VLC 2.0 features a “vastly improved” MKV demuxer. If you simply care about formats and the stuff VLC can open or has been optimized for, this release shouldn’t disappoint you.

With over 7000 commits to the open source project and 160 contributing volunteers in the past couple of years, however, VLC 2.0 isn’t only focused on making its media player capabilities play nicer with audio and video formats. As we detailed in our previous coverage, one of VLC’s new visible changes is the application’s design on the Mac, a radical change aimed at unifying VLC’s file management and playback functionalities in a single window that, among other things, also happens to support Lion’s native full-screen mode. Available in two color schemes – Lion gray and QTX black – VLC’s new single window interface integrates playback and browsing in a way that, for example, allows you to start playing a movie, hit a button, and go back to the browsing UI with the movie still playing in the background. In my tests, transitioning from a movie (streamed off the MacBook Pro mentioned above, now used as a media server in my house as I upgraded to a MacBook Air) to VLC’s new Library was immediate, and the footprint on system memory minimal, or not visible at all. Because the new VLC for Mac integrates media, sources, and playback in the same window, you’ll be able to open a file, invoke the Playlist shortcut from the Window menu (CMD + Shift + P), look for another file (either manually or from the integrated search view), and adjust its position in the media queue right away.

Thankfully, those who don’t like the change to a unified window will be able to revert back to VLC’s standard multi-window system with an option in the app’s Preferences. The Preferences menu has also been overhauled with a new design and more settings, including one to disable Apple’s full-screen mode for OS X Lion and enable Growl notifications on playlist item change. As usual, there’s a lot to explore within VLC’s settings if you really want to adjust the app to your tastes (and media configuration). 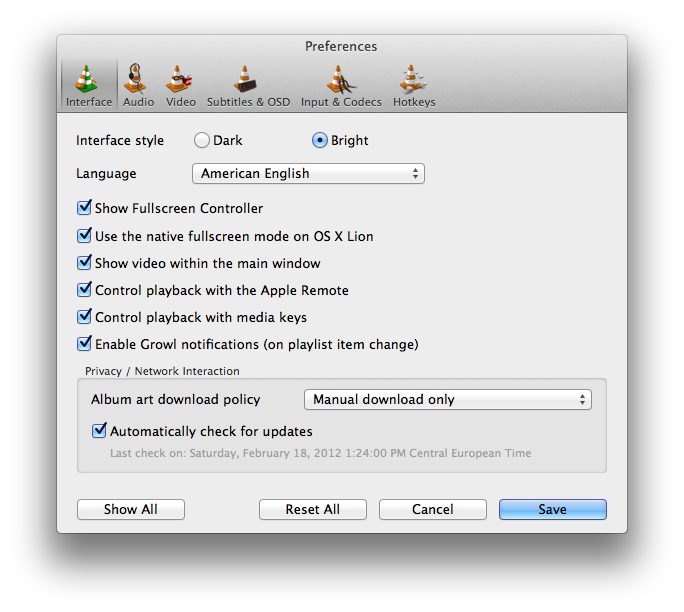 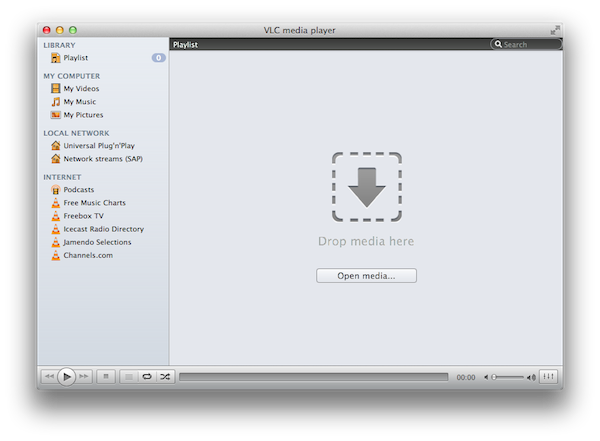 What I’ve always liked about VLC since I started using it in 2003 is that it can be extremely simple and accessible, or extremely complex and “advanced” thanks to the amount of options and settings it brings at your fingertips. If you really want to get geeky with video formats, inputs, codecs and streaming sessions, VLC 2.0 will most definitely have you covered with its variety of new features and tweaks to the underlying engine. If you, however, simply prefer a lightweight, elegant and powerful alternative to iTunes and QuickTime for browsing and playing your music and movies, VLC is an equally great alternative as it’s easy to use, fast, and stable. And whilst the new Mac interface will be heavily criticized (especially in its black version) by those that dislike change on principle, I think change is good, as it confirms that VideoLAN and its community strive for innovation in order to bring VLC to an even broader audience. The single window interface is useful, simple to understand, and helps you save time; performances in version 2.0 have been dramatically improved, and there’s lots more to come. Go download VLC 2.0 here.

For the release of the new VLC, I was able to chat with VideoLAN’s President Jean-Baptiste Kempf and lead Mac developer Felix Paul Kühne about the 2.0 milestone, the process that went into developing this new major release, and what’s in store for the future. Check out the interview, as well as a visualization of VLC’s development activity in 2011, after the break.

 - Hey guys, congratulations on the release of VLC 2.0. Can you tell us a bit more about its development - this has been in the works for quite a while, right?

Felix Paul Kühne: Yes, we started to conceptualize a radical interface rework of VLC’s Mac OS X port back in 2008. Since the initial approach turned out too complex, work started on a complete re-write code-named Lunettes, which eventually converged into VLC for iOS.

Jean-Baptiste Kempf: For VLC 2.0, we merged ideas from our 2008 drafts with knowledge gained from the Lunettes project. This way, we were able to keep backward compatibility with our previous release while making the interface noticeably faster, more lightweight and most importantly for us way easier to expand.

- How is VLC 2.0 different from the early ideas/mockups you had for this version?

Jean-Baptiste Kempf: Well, not that much, in most things. Of course, not all widgets are the exact same as it was then, but this is the same spirit. However, the biggest difference is the cohabitation between playback and playlist, but this might evolve in a future version.

- What’s the most important achievement in VLC 2.0 from a functionality standpoint?

Felix Paul Kühne: A vastly simplified interface. Many service discovery modules and the media library displayed in the sidebar on the left used to be around in VLC for years, but these were hard to find for most users. It’s a major improvement to be able to use these with a single click or to be able to browse one’s video, music and pictures folders without using the Finder or browsing Open dialogs.

Jean-Baptiste Kempf: However, the most important changes are probably under the hood, that make VLC 2.0 way faster than the older version, even for multicore G5 hardware, notably the multi-threading decoding, the new video output with better subtitles and shaders support and the new QTKit capture modules.

- How has the VLC community helped in the development of 2.0 for multiple platforms?

Felix Paul Kühne: The VideoLAN community contributed a lot of time from volunteers who tested this release, made us aware of bugs and suggested missing features. Additionally, the VideoLAN non-profit organisation backed the development by providing hardware and access to pre-release versions of Mac OS X.

- Speaking of the Mac version, is there anything you wish could implement in time but had to save for a future update - perhaps some Lion-only stuff?

Felix Paul Kühne: There are a few improvements scheduled for 2.0.1 already, especially enhancing the time line slider for small videos. Additionally, live audio input is supported on the command-line only in VLC 2.0 since its graphical interface was not ready in time. For VLC 2.0, we decided to limit Lion-only features in order to be able to support  earlier releases of Mac OS X including 10.5 on the PowerPC platform. Except for Lion’s fullscreen mode, all of VLC’s features for Mac are available on 10.5, 10.6 and 10.7. We would like to keep it like that.

Jean-Baptiste Kempf: There is still a lot of work to do for a correct Blu-Ray support too, but this will come.

- What’s the status of a VLC app for iOS? The one that was released last year didn’t end up very well.

Felix Paul Kühne: Due to libvlc’s relicensing from GPLv2+ to LGPLv2+, we might be able to pickup the development of VLC for iOS. At present, we reviewing additional legal implications of providing VLC on the iOS App Store.

Jean-Baptiste Kempf: VLC for Android is currently in the works and is going to be released later this year.

- Congratulations again on the release. What should we expect from the next updates to VLC 2.0?

Jean-Baptiste Kempf: At present, we are working on hardware accelerated video decoding for the Mac, which will be supported on Mac OS X 10.6 and later through the VDADecoder API. Also, a lot of small fixes for the new UI will appear in the smaller 2.0.1, 2.0.x revisions.

Felix Paul Kühne: Additionally, VLC’s next major release will include a completely reworked GUI for converting and streaming media, so its users will able to get proper results within a few clicks.

Jean-Baptiste Kempf: We hope that someone is going to work on AirPlay integration, but nothing was started yet.