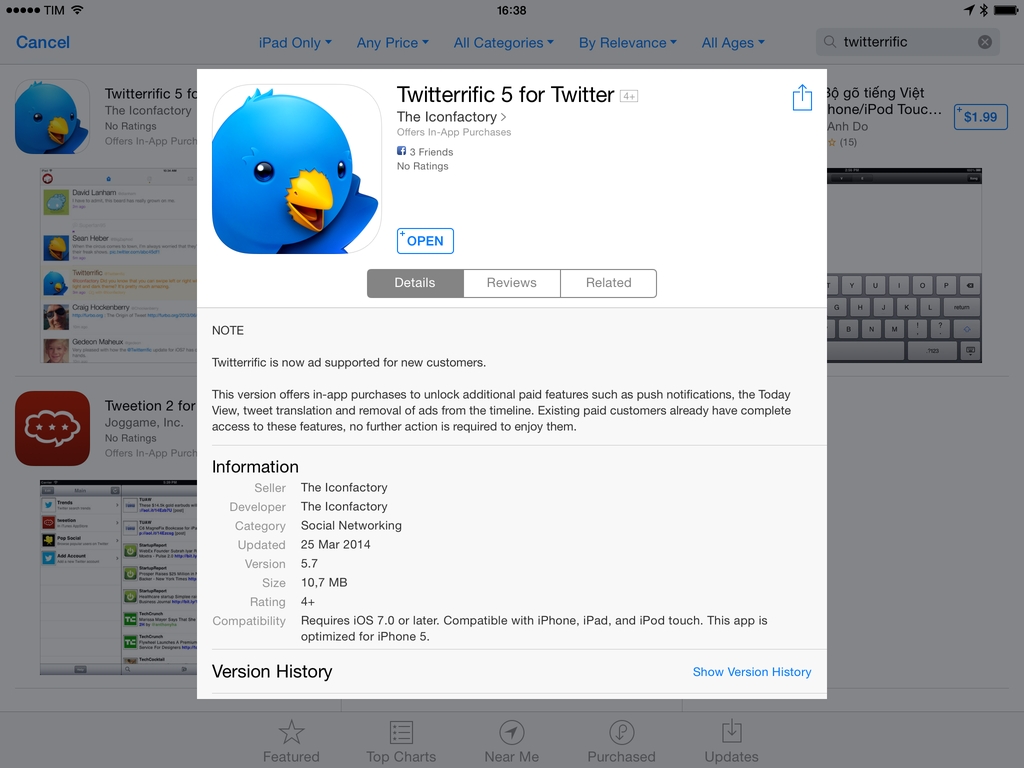 With the latest 5.7 update released today, Twitterrific for iOS, The Iconfactory’s popular Twitter client, has gone freemium: the app is now free to download with In-App Purchases to unlock more features and remove ads from the app. For those who have been around to witness Twitterrific’s evolution through the years, this move actually marks the return of The Iconfactory’s client to a freemium business model with ads.

Twitterrific has been available in the App Store since day one and we’ve experimented with different revenue models in the past, including the one we’re returning to today. Our hope is that this helps get Twitterrific into more people’s hands than ever before so they can enjoy the simple beauty of reading and posting tweets once again. The update also includes some improvements including upping the number of tweets the timeline can hold to 500, something users have been requesting more and more.

The Iconfactory’s Gedeon Maheux published his thoughts on the new strategy in a separate blog post:

There are lots of risks with moving to this type of revenue model, but version 4 of Twitterrific was by far our most successful and that version was supported by ad revenue from The Deck. No doubt levels of support will increase dramatically for us but that’s part of the trade-off of having successful, thriving software. I’m also personally curious to see if moving to the free model and increasing the app’s downloads by at least 1 or 2 orders of magnitude will improve Twitterrific’s search results in the App Store.

For existing customers who bought Twitterrific 5.0 when it launched in December 2012, all features will be automatically unlocked by default. Twitterrific’s renewed freemium approach comes at an interesting time: Apple is testing a feature to enable customers to find more specific, relevant apps in search results (whose ranking is affected by the number of downloads, which a freemium strategy can facilitate), and Twitter is still enforcing a token limit on third-party clients. While news of third-party Twitter apps exceeding their token limits aren’t new on other platforms, popular clients for iOS such as Tweetbot and Twitterrific have so far managed to always accommodate new users without issues.

It’ll be interesting to see how going freemium will affect Twitterrific’s popularity and relevance in search results; in the past months, the app received several enhancements such as live streaming and background refresh. Features that are now part of the In-App Purchase include tweet translation, Today view, and push notifications, which are automatically unlocked using iOS 7’s receipt validation for existing customers.

Twitterrific 5.7 is available on the App Store.