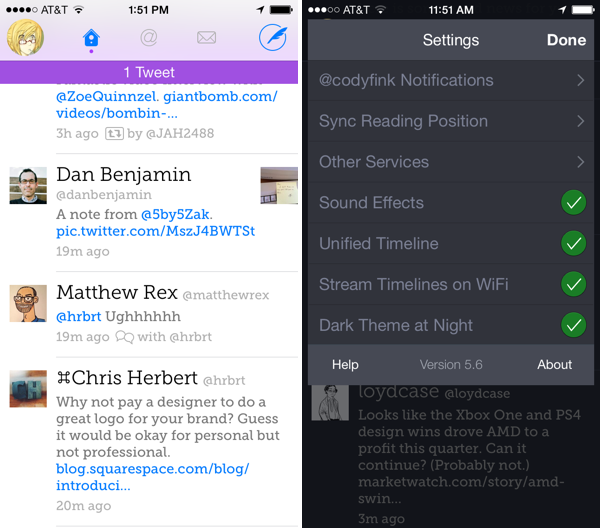 Hey! Live streaming for Twitterrific is really here. It works over Wi-Fi, and can be enabled by toggling the setting in the settings. Live streaming works similarly to “pin timeline” settings in other apps, where enabling live streaming makes it so that you’re always viewing the latest tweets in your timeline. You can scroll around, but the timeline will jump to the most recent tweet when left idle (useful for anyone who docks their iPhone in a cradle at their desk). On the flip side, Live streaming keeps the display turned on, which can unintentionally drain your battery if you set your phone down or forget to put it to sleep. I think it needs some fine tuning before it’s just right.

Something to keep in mind is that Twitterrific enabled background refreshing in a previous update, which fetches tweets when you’re outside of the app. If you only check the app a few times a day, Live streaming might not be such a big deal. If you’re always on Twitter, however, Live streaming is worth turning on, despite some caveats.

The other biggie found in Twitterrific 5.6 is list management. You can create, add people to, and remove people from lists. You can create and delete lists, as well as set whether they’re private. I would expect to find a lot of this functionality in the sidebar, but Twitterrific has it tucked away in a contextual menu. Creating and managing lists is done by tapping and holding on an avatar in your timeline, selecting “Manage in Lists,” and going from there. I kept looking for list settings, a hidden add button, and kept wondering what I was missing — it’s pretty well hidden. You can also get to it by tapping the gear icon when viewing someone’s profile.

As for the smaller things, you can now view images in Direct Messages, as well as copy discussions from the share menu.

Live streaming for Twitterrific has obviously been a long time coming. Twitterrific 5 has been a series of big incremental improvements, starting with things like Push Notifications and Muffling, and performance continues to blow me away. To celebrate their big update, Twitterrific 5.6 is $0.99 for a limited time in the App Store, and those who’ve previously purchased the app can download the update for free. And you’re getting a lot of bang for your buck: the app works across iPhone and iPad.

Perhaps the last remaining question is when is The Iconfactory going to bring these updates back to the Mac?