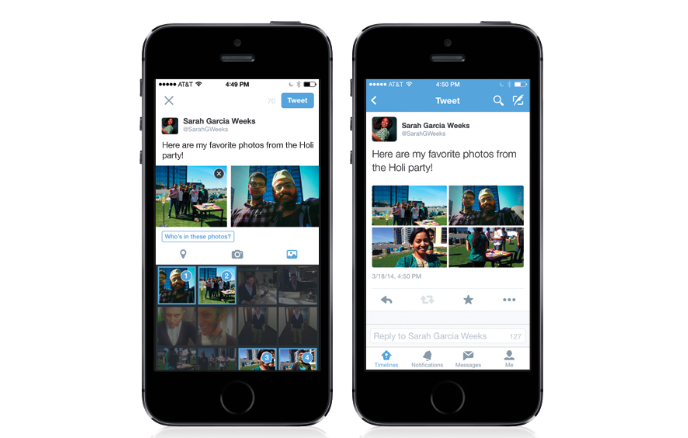 In an update to their iOS app released today, Twitter has started rolling out two enhancements to make photos “more social”: one is the ability to tag people in a tweet; the other is an option to include up to four photos in a single tweet.

With photo tagging, Twitter aims at increasing conversations between users by allowing people to be tagged with @usernames that don’t count against the limit of 140 characters in a tweet. As noted by Matthew Panzarino, tagged @usernames count as metadata in the new photo tagging feature; up to 10 people can be tagged in a photo, and they will be alerted of the new tag through a notification. Photo tagging has long been a marquee feature of networks such as Facebook and Instagram, and it’ll be interesting to see if Twitter will eventually roll out new gallery views on profiles to browse or filter photos by tag.

The second change in today’s update is an option to attach up to four photos in a tweet. From Twitter’s blog post:

And now, you can also share a series of photos that automatically create a collage. Just tap on a preview to get the full image and slide through the group. The ability to upload multiple photos is starting to roll out today on iPhone, and is coming soon to Android and twitter.com. Whether you’re on iPhone, Android or twitter.com, you can view Tweets with multiple photos.

Both tags and multiple photos will be enabled in embedded tweets, and, while the statement has been made by Twitter’s developer team before, “there’s no reason” today’s new features couldn’t be available for third-party clients as well.

Twitter 6.3 for iOS is available on the App Store.