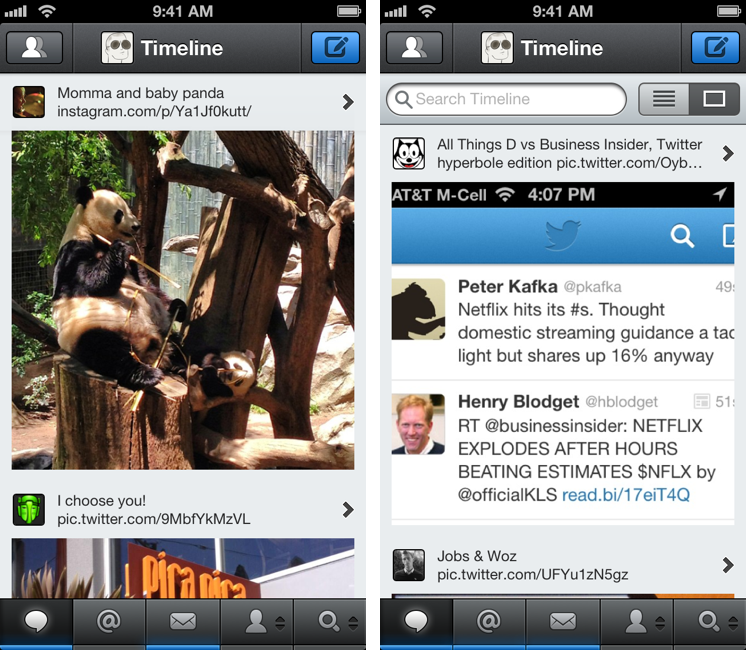 Ever since its original release two years ago, I’ve always wished Tweetbot could provide filters to separate the standard timeline from a “media” one containing pictures and videos. After the launch of Twitter’s own photo service and rise in popularity of services like Instagram, usage of pictures – either photos or screenshots – among the people I follow has skyrocketed. Apps like TweetGlass (nèe Quip) succesfully explored the concept of letting users browse “media updates” in a dedicated feed, so why not Tweetbot?

The latest version of Tapbots’ client, available today, does just that: it adds a media timeline to show only supported images and video tweets (the ones that you’d normally see displayed inline as thumbnails).

To access the new media timeline, you can scroll at the top of the regular timeline and – both on the iPhone and iPad – hit the media button next to the search bar. In the media timeline, status updates containing pictures or videos will show their respective media fully expanded inline, ready to be tapped to be viewed in full-screen. Imagine a mix of Tweetbot’s existing style and Instagram’s photo feed and you get the idea.

Tweets are shown right above the picture/video they contain, and you can tap the text of a tweet to open the usual tweet detail view – which now displays the amount of faves/retweets a tweet has received (unfortunately, you can’t tap these to show a list of users who have faved/retweeted that tweet).

Upon tapping on an image in Tweetbot 2.8, you’ll also notice how the image viewer has been completely redone to act like its Mac counterpart. Tapping on an image in Tweetbot 2.8 shows the same loading indicator of Tweetbot for Mac (which is good for consistency across platforms) and brings images in the foreground with a delightful animation that is reminiscent of Facebook for iOS’ image viewer, only a bit faster. Like Facebook, you can dismiss images with a vertical swipe (on the iPhone); both on the iPhone and iPad, you can also tap anywhere on the screen to close the modal image viewer. I’m a big fan of Facebook’s swipe-to-close-image implementation, and I’m glad Tweetbot for iPhone now works in the same way (primarily because always reaching out to the Back button in the top left corner can get tiresome for me). 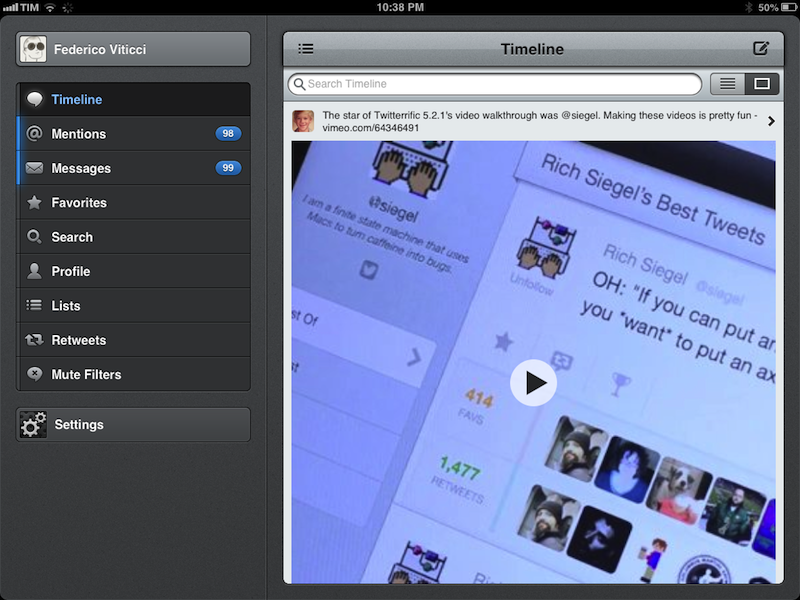 I only have some minor gripes with the media timeline. In order to keep the same size of tweets across the entire timeline, sometimes longer tweets are cut off, forcing you to open the detail view to read them in full (you can see this here); you can’t tap on a user’s avatar to go to his/her timeline; and, you can’t tap & hold on the inline preview – you have to open the image and then tap & hold to bring up the contextual menu.

Another addition that I’d like to see would be an option to switch to the media timeline from anywhere (not just from a button at the top) while maintaining reading position. I imagine this could be done by adding a tap & hold option to the Timeline tab bar item – but, again, I understand why Tapbots went for a simpler approach.[1]

Overall, I’m a fan of the new media timeline. It makes scrolling through photos a more relaxed, visual experience that is well distinct from Tweetbot’s more option-rich regular timeline. The new image viewer is fast, smooth, and easy to use; Instagram previews have been fixed; and, obviously, various bug fixes and improvements are awaiting in this release as well.

Tweetbot 2.8 is available now on the App Store.