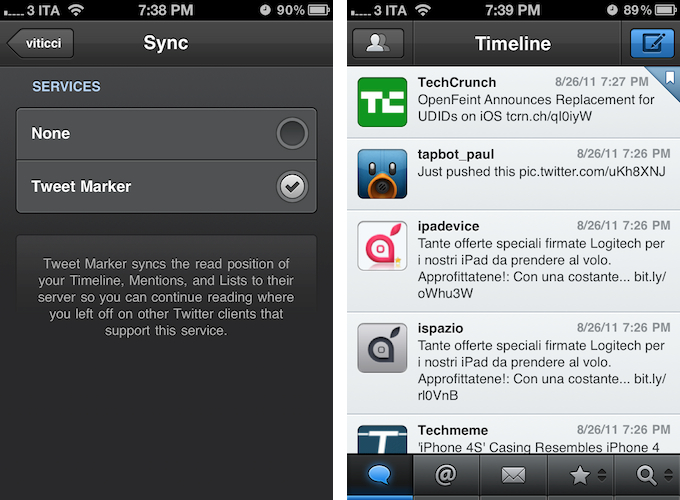 Following the muting features and improvements introduced in version 1.5, everyone’s favorite Twitter client from Tapbots, Tweetbot, has been updated to 1.6 to include timeline sync through Manton Reece’s Tweet Marker. For those unaware of such system, Tweet Marker is a fantastic free web service that allows developers to turn on a feature in their Twitter clients to enable timeline sync for users. Best showcased in the Iconfactory’s Twitterrific for Mac and iOS, Tweet Marker lets users effortlessly switch between apps or platforms (such as the iPad and Mac) while retaining the last-read tweet position. In Twitterrific, as we detailed in our coverage, Tweet Marker integration means the app can either “show the marker”, or automatically scroll to it.

Because Tweet Marker is cross-platform, your timeline position from Twitterrific (or any other app that will soon support the service) can be synced to Tweetbot, and vice versa. Tweetbot will automatically scroll to the last synced tweet in your timeline, and display a “marker” next to it. To enable Tweet Marker in Tweetbot a quick trip to the Settings is required, so you can activate “Sync” under Account Settings -> Services. Furthermore, Tweetbot syncs mentions and lists as well through Tweet Marker, so future applications that will integrate this technology will have the opportunity to get further syncing besides the main timeline. As usual, Tweet Marker’s sync is invisible, and fast. You won’t even notice it once it’s active, and it works really well combined with Twitterrific (which I’m a big fan of).

Tweetbot 1.6 also brings various improvements to username search in the compose view, which now uses your following list, and location. The latter has been refined to “stick” your location including POI across multiple tweets if you haven’t moved. It’s a nice touch.

The latest update to Tweetbot is nice, but it becomes a must-have if you’re already hooked to Tweet Marker’s usefulness and simplicity. Get it now on the App Store at $2.99.