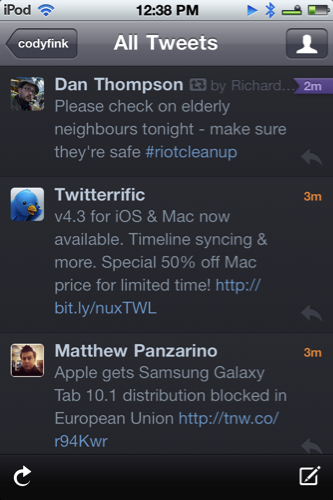 Twitterrific 4.3 is now available on the iOS App Store and on the Mac App Store, featuring timeline sync via Tweet Marker. Tweet Marker is a service that enables developers to remember where you stopped reading your timeline on one device, so you can start where you left off on another. If you value reading every tweet (and not just what’s happening right now), Tweet Marker gives Twitterrific tremendous value. There’s virtually very little users have to do on their end to enable Tweet Marker, but we’ll break down all the juicy details pertaining the purple bookmark past the break. 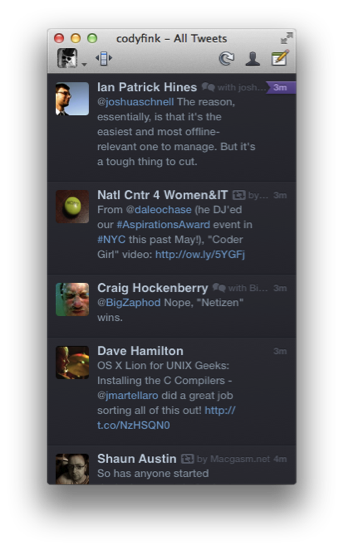 Tweet Marker sync happens in real time (most apparent from Mac to iOS) — it’s intended for use when you switch from your Mac to your iOS device, between iOS devices, or vice-versa. Say you’re reading your Twitter timeline through Twitterrific on the bus. You close the app when you get off, walk home, then jump on the Mac. Twitterrific for the Mac will briefly refresh before scrolling you to the position where you left off. That’s Tweet Marker in a nutshell — it remembers the top-most tweet (fully exposed in the app window) as you quit on iOS, and the top-most tweet as you leave Twitterrific’s focus on the Mac. It works best as you quit Twitterrific on one device (like your iPhone) and open it on another (such as on the iPad). Overall, we’re very happy with the implementation, and the purple bookmark over the time indicator is a great way to notify the user where they left off without cluttering the interface. 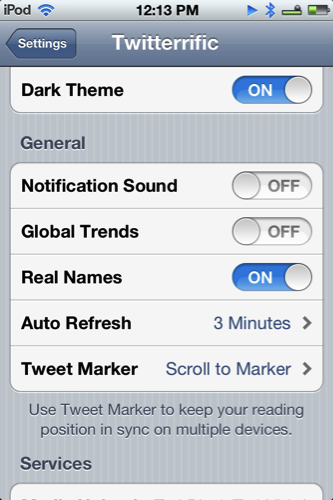 Tweet Marker has to be enabled in the settings, and you have a few options on how you want to work with it. You can choose to leave it off (nah), only show the indicator, or have Twitterrific automatically scroll to the saved position when you open the app. Personally (and I think most people will choose this option), having Twitterrific take you where you left off is the only way to go. Settings for Twitterrific on the iPhone or iPad can be found in the Settings app, while you can simply visit the preferences for Twitterrific on the Mac.

Asides from Tweet Marker, what else is new? There’s improvements t.co and Twitter picture handling — @Twitterrific informed me that, when possible, images via services wrapped by t.co (such as yFrog or Twitpic) will be displayed in popovers (instead of the browser) when you tap on them. The latest version of Twitterrific also supports displaying campl.us images in popovers for use with Camera+. 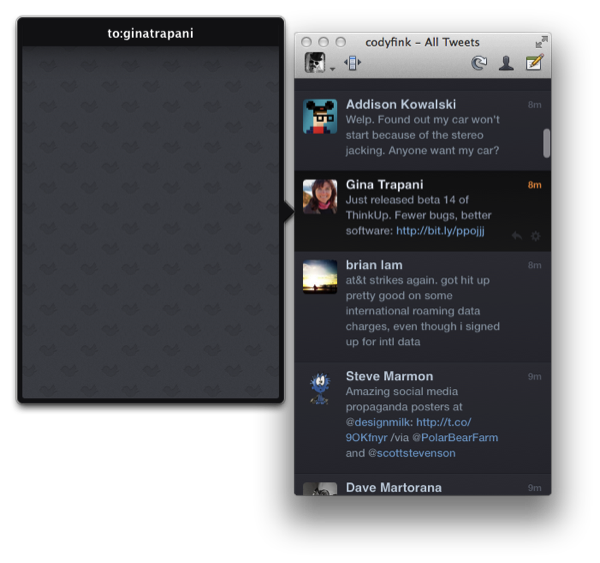 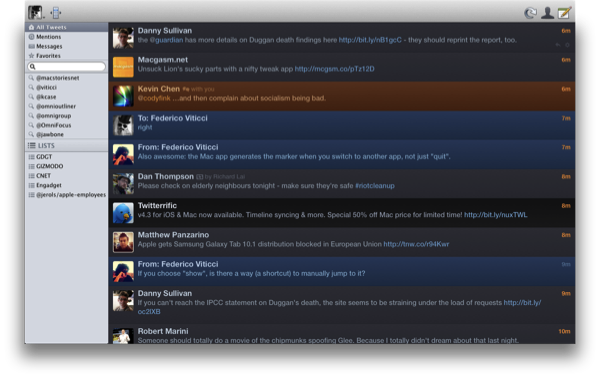 Other refinements to the latest version of Twitterrific include graphical refinements to the timeline, buttons, and popovers, and the Mac app has gained full-screen mode support in Lion. Full-screen support on Lion is really odd — I did make an attempt to make it work by bumping up the font and toolbar button sizes, but I can’t see myself using it this way (it doesn’t have quite the same charm as the it does on the iPad in the landscape orientation).

Twitterrific 4.3 is a solid update, and with the introduction of Tweet Marker comes a sale so you can try the new features at a reduced price. The Mac version (originally $9.99) is now only $4.99 in the Mac App Store, with the iOS app available on the App Store for free (a $4.99 in-app-purchase gives you the option to remove ads).