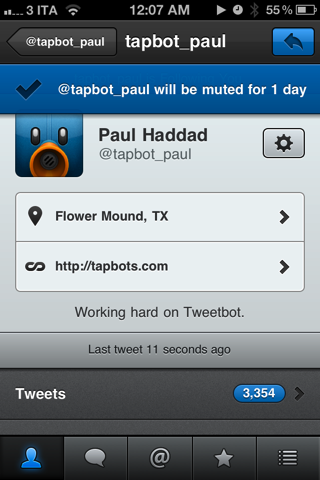 Well, it’s finally here. You asked for it — you wagged your finger about it — you hate the people you follow on Twitter so much that you don’t want to hear another peep out of them, yet deep down you don’t really want to get in one of those uncomfortable, “Why did you unfollow me!?” moments. Or maybe someone’s had a little too much caffeine and you just need a break. With Tweetbot 1.5, you can mute those pesky over-tweeters and keep meme-esque hashtags from cluttering your #pantsfree timeline. Although I hear there’s a self desctruction mechanism built in if you ever mute #tweetbot. 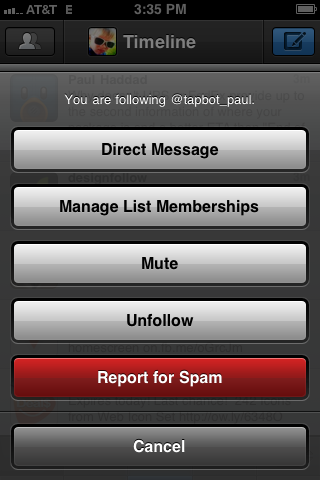 Muting! It’s like the unfollow no-one else but you has to know about. Let’s look at Tapbot_Paul for example: he’s been going overboard with these Google + Motorola tweets. Yeah, I could miss out on some new Tweetbot news, but I’ll take my chances and keep Paul out of my timeline for a day. Ah, peace and quiet! And if I miss the warmth of his tweeting voice, I can undo the mute at anytime. 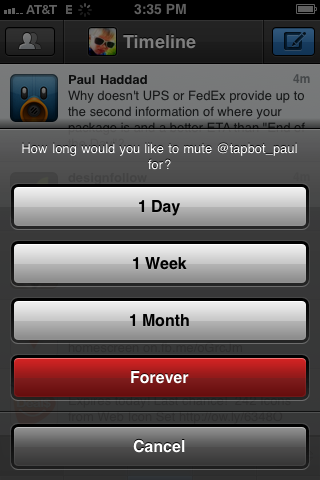 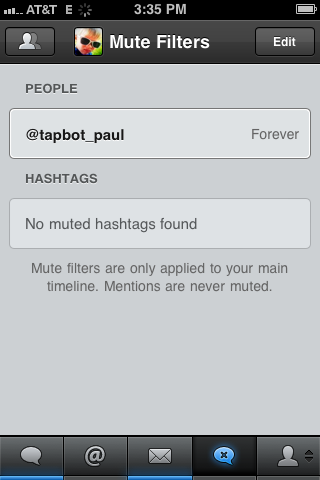 So how does muting work? It works pretty similarly to reporting someone as spam: you hold down on that person’s avatar (or alternatively visit their profile and hit the gear button), and select the mute option. If you want to see everything you’ve muted, there’s a new button in the tab bar so you can manage everything and everyone. What about hashtags? Just hold on the hashtag, and mute that bad-boy too. Anyone who tweets with that annoying #hastag will be filtered from your timeline. 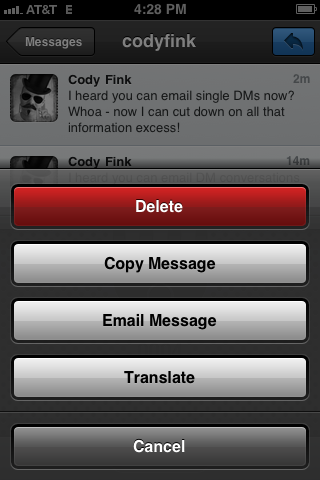 There’s some additional goodies too, just in case muting wasn’t enough. You’ve been able to email direct message conversations for a while now, but what if you only want to email a single message? You were once able to tap on a direct message and only get options to translate and copy the tweet, but now you have the additional option of emailing it off. This is great if you want to share directions, instructions, etc. without sharing the entire conversation about Godzilla vs. Mothra. I imagine this will be useful for a lot of you mobile lackeys.

Talking about lackeys (this is a terrible transition — I am so sorry), those engineering-crazies over at Twitter are undoing this whole short URL business with a bunch of t.co links. Every link you post on Twitter will now be shortened with Twitter’s magic shortener — if you want the “why” behind it all, read here and here. I’m not crazy about t.co, but other people love them. The nice thing about t.co links at least is that you won’t notice them — Twitter’s apps and Tweetbot automatically expand the URL so you can see what you’re getting into. 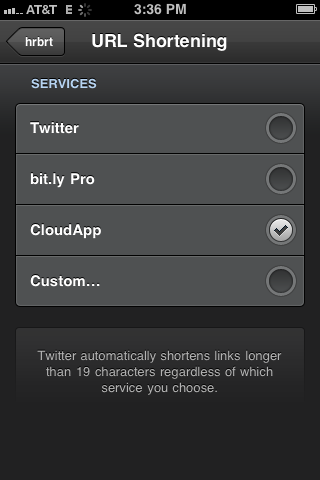 Because of this short URL hoopla, there might be an unhappy person or two. Tweetbot, now in full support of t.co URLs, has cut down on the shortening services provided. Everything from j.mp to TinyURL has been gutted to support only a few services (including Twitter’s own) for analytics outside of the Twitter ecosytem (bit.ly pro) or for CloudApp. In response to the, “OMG @$#! WHY would you do this!?” exclamation-exclamations, the short answer is because t.co is going to shorten links regardless of external short URL you use.

While I sidestep the possible rage-face caused by the last dose of information, I can gladly say that Tweetbot has international hastag support! At least for Japanese, Cryllic, and Korean (I’m not sure about other languages) — Twitter rolled out a feature not long ago that would allow you to see English Tweets written in a more familiar language, and now Tweetbot can do it too.

So that’s Tweetbot 1.5: Muting, t.co all the way, and international hashtag support ready for your grimey fingers in the App Store. Just hit the update button — it’s sitting right there (or will be soon). If you don’t have Tweetbot yet, you’re missing out: slick animations, in-app notifications, and other goodies await. A great companion to your stockpile of Twitter clients, you can grab Tweetbot for $2.99 in the App Store.