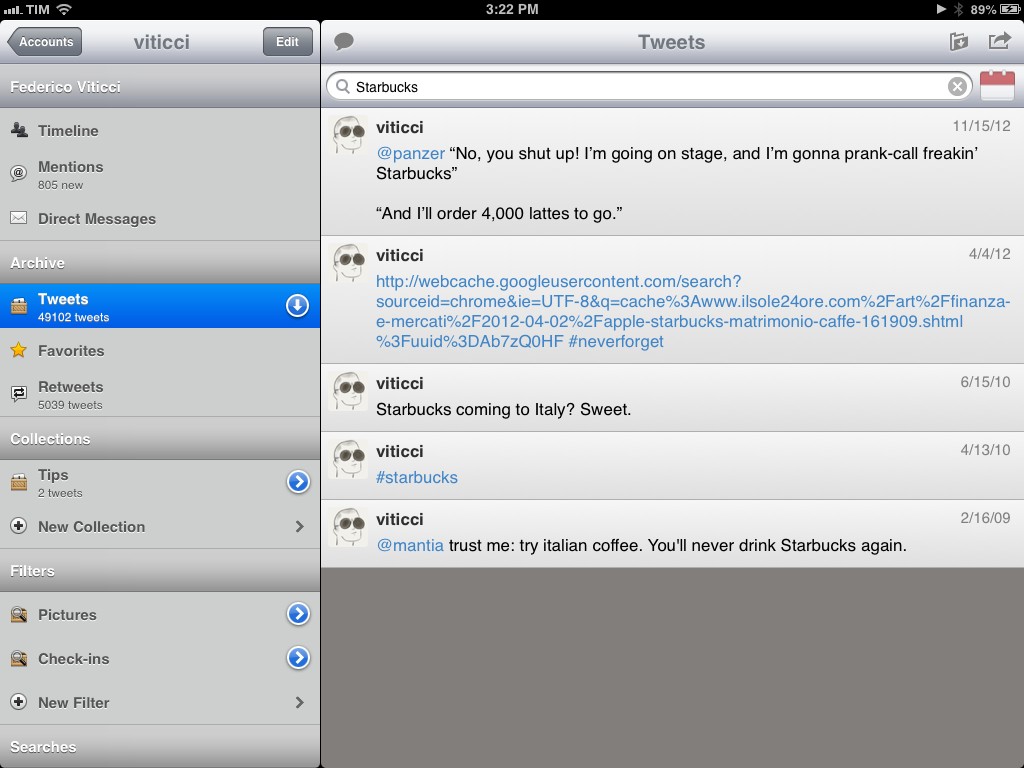 The option, launched a few months ago, enables you to download a complete archive of all your tweets and retweets inside a .zip file that contains CSV and JS archives with a nice HTML page you can browse. With over 50,000 tweets since February 15, 2009, my .zip file weighed at around 9 MB. Seeing tweets from four years ago has a strange effect in that it shows the ephemeral nature of 140 character-long status updates in better context. In other words, I used to tweet “good morning” and “goodnight”; with time, I lost my good Twitter manners.

The Twitter archive was a feature I had been anticipating for quite a while. As you know, I have been a strong proponent of solutions to archive and search your Twitter account – such as Manton Reece’s Tweet Library, Cue (formerly Greplin), and CloudMagic. Prior to the rollout of the Twitter archive, all these solutions allowed you to search your most recent tweets (Cue and CloudMagic) or download the past 3200 (Tweet Library); none of them could, per Twitter’s API limit, access your entire Twitter history.

I was on my iPad last night, and I used iCab to download the .zip file from Twitter because Safari and Chrome don’t have a download feature (after 6 years of iOS, Apple still thinks users can’t possibly download anything legal on their mobile browsers). I like iCab because it lets you download files and unzip them if they’re compressed. I started taking a look at the HTML page directly in iCab, but the app was struggling to keep up with my 50,000 tweets; I forwarded the same set of files to Textastic, but the editor’s built-in preview struggled as well.

Back in December, I tweeted that it’d be cool to use an app capable of importing a Twitter archive and analyzing keywords of a user’s Twitter history. While I haven’t come across such app yet, I was able to retrieve that tweet using Tweet Library.

Tweet Library isn’t new to my devices, but I have to admit I haven’t been using the app on a daily basis. 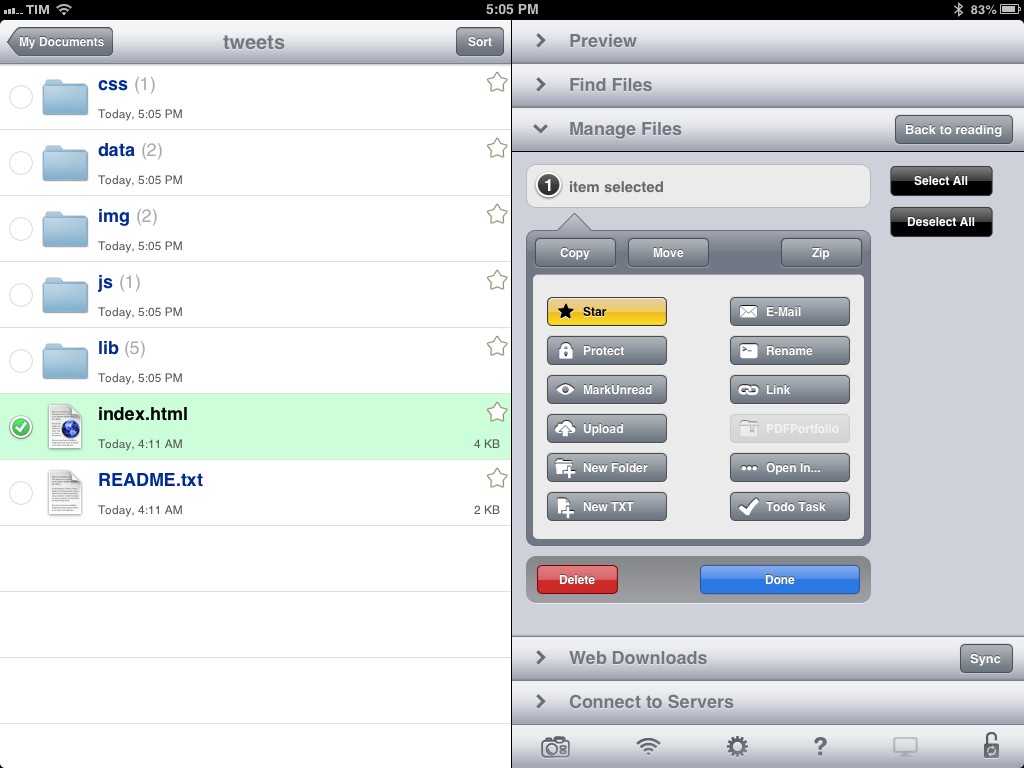 Last month, Manton updated Tweet Library to add support for importing the Twitter archive. Here’s how it worked for me: using GoodReader, I uploaded the .zip file I got from Twitter to a directory Tweet Library created in my Dropbox. Tweet Library 2.2 comes with a new blue arrow icon next to the Tweets sidebar item to start a wizard that will let you create a folder in Dropbox and scan it; I started the procedure in Tweet Library, jumped to GoodReader, and went back to Tweet Library once the upload was done. After that, Tweet Library found the .zip file and began importing all my tweets. It took Tweet Library around 15 minutes to import 50,000 tweets and 5,000 retweets; the app imported every tweet from the first one four years ago to the latest one, intelligently avoiding duplicates when matching the Twitter archive with the tweets it had already downloaded on its own. It was a slow, one-time, extremely reliable and efficient process.

Once the tweets have been imported, you’re off to the races. The Archive section in the sidebar will show separate tabs for Tweets and Retweets; all the other features behave just like the Tweet Library you already know. Essentially, you’re simply giving Tweet Library access to a local database of your entire Twitter history.

The “local” factor is key for me. Services like Cue and CloudMagic scan a server for hits matching your query – meaning there’s always a response time to deal with, which can be annoying on 3G. In Tweet Library, a search field filters results in real-time with a minimum delay due to the fact that, in my case, the app is scanning over 50,000 entries. I managed to find my first tweet about the iPhone 4 in two seconds; when you find a tweet, you can perform a tap & hold to bring up a menu to Copy the tweet’s link and go share it in another client for belated derision of your past tweets.

In terms of workflow, I am not exaggerating when I say this is a game-changer for me. MacStories readers know that I reference old tweets in almost every article I write, trying to discover old screenshots or thoughts about Apple-related news I am covering. Tweet Library may not be the fanciest Twitter app out there, but with the addition of the Twitter archive it certainly is the most useful one for me (alongside Tweetbot) at this point. 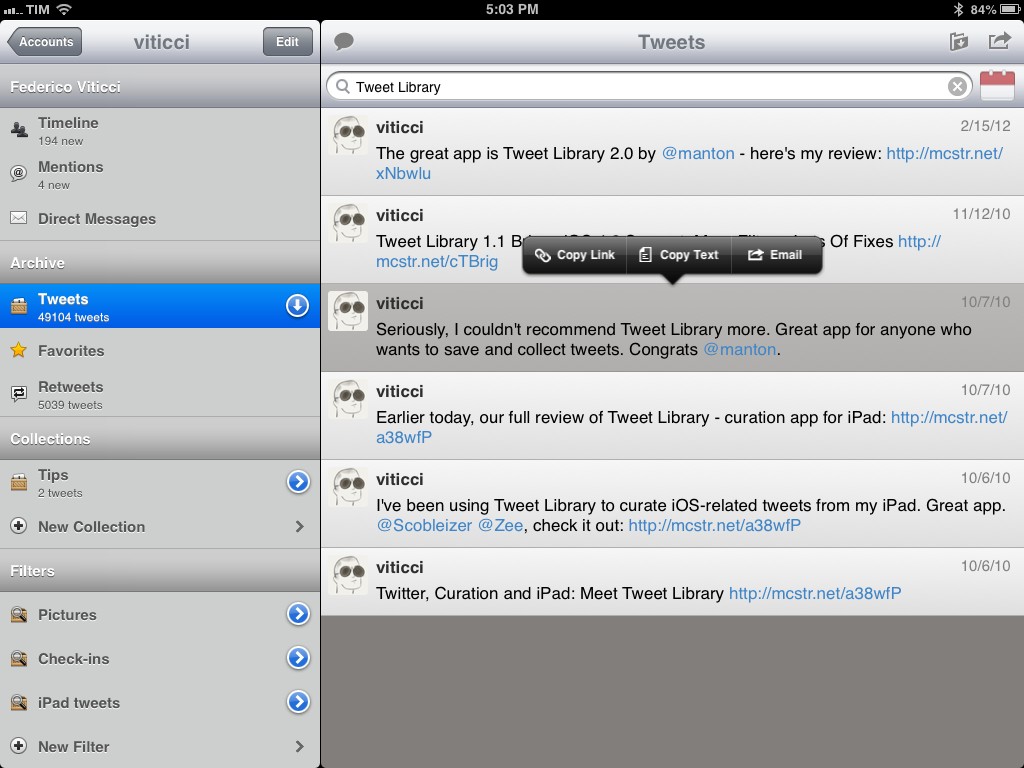 There are some things I’d like to see in a future update. In spite of my Twitter history going back to February 2009, the date picker menu at the top of the screen only lets me go as far as September 2011; I suppose this is due to the fact that a single popover couldn’t fit all the “pages” required for 48 months. Second, while I understand the need of “paginating” search results (new ones load automatically as you scroll to the bottom), I wonder if it’d be possible to fetch a bit more every time.

More importantly, however, I’d like to do saved searches for my own Archive. Right now, Tweet Library lets me save searches and filters for my timeline, but I can’t seem to find an option to filter and save my own tweets. Considering there’s already a search field in the Tweets view, I’d like to build queries such as “iPad on:1/27/2010 retweets:off” to save a search for my tweets with the word “iPad” sent on January 27, 2010. Saving these searches would provide a great companion to the existing Mail and Export features.

Speaking of which, creating a CSV export file from Tweet Library took aroundd 5 minutes: unfortunately, that file is only made available for computers connected to an iOS devices over iTunes, whereas I would like to see it becoming available for “Open In” (or upload to Dropbox) within Tweet Library. As for Mail sharing, the app can only export 5,000 tweets: I presume this is a limitation set in place to cope with some kind of Apple Mail-related rule, and if so, I believe it’d be nice to offer an export of 5,000 tweets within a specific date range.

I am impressed by Tweet Library’s support for the Twitter archive and I am putting the app back on my Home screen today. If you value the possibility of searching your entire Twitter archive without a web service, go ahead and give Tweet Library a second try. Or, get the app at $4.99 on the App Store.