The Thunderbolt ports on our new MacBook Airs and MacBook Pros didn’t receive a lot of attention in 2011, with tech demos still carrying on through the mid-year as LaCie and Promise flexed their muscles at Computex. Seven months later at this year’s Consumer Electronics Show, several companies were finally prepared to unveil their products integrated with Thunderbolt technologies on the show floor (and we expect to see more at the upcoming Macworld | iWorld). Past the break we’ll take a look at ten new Thunderbolt accessories that offer connected solutions, speedy storage, and new possibilities for stellar gaming performance. 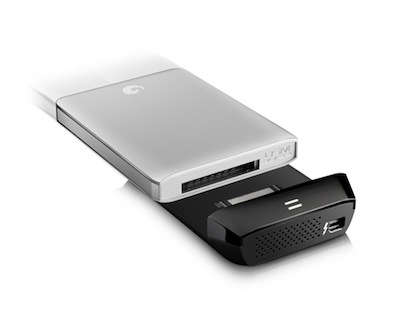 Seagate has the advantage of being able to extend the usefulness of their GoFlex drives by offering adapters for USB 3, Firewire 800, and now Thunderbolt which works by simply unplugging the old adapter, and attaching the new one via Seagate’s proprietary connector. Seagate’s GoFlex Thunderbolt Adapter can upgrade a standard USB 2 external hard drive to a Thunderbolt capable one, especially useful for when you finally upgrade your Firewire equipped Mac to a newer model. According to Seagate, a Thunderbolt equipped drive will give you two to three times the performance of a Firewire 800 connection. The standard GoFlex adapter for 2.5” drives will set you back $100, while the Desk adapter for 3.5” drives will set you back a hefty $190. Look for Seagate’s Thunderbolt Adapter in the first quarter of 2012.

via The New York Times

About the size of a small RAID box, LaCie’s “Thunderbolt Hub” allows you to connect two eSATA drives to your MacBook Pro. The idea is that you can you bring your own storage as you need it (the hub is more cost effective than buying a big Thunderbolt storage solution), or you can connect the eSATA drives you’re already utilizing to a hub that works on the same line as your display. Why is eSATA the preference here? There’s an abundance of eSATA drives on the market and they offer a top transfer speed of 6GB/s that can readily take advantage of a Thunderbolt pipe. LaCie’s hub also gives you the opportunity to daisy chain more Thunderbolt hubs and connect a compatible display. Pricing hasn’t been announced, but it should be available in the first quarter of 2012. 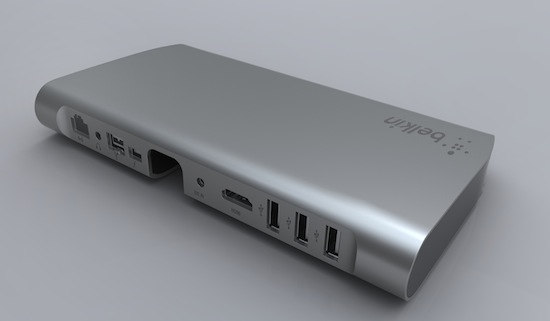 Instead of eSATA, what if we wanted to connect a slew of USB and Firewire 800 devices, or an HDMI equipped monitor to our Macs instead? Belkin has also announced their take on a Thunderbolt dock, which adds gigabit Ethernet, three USB 2.0 ports, a Firewire 800 port, an HDMI and a 3.5mm audio port. Belkin’s Thunderbolt Express Dock effectively turns your desktop into a proper workstation, taking advantage of the peripherals most consumers already likely to own and use on a daily basis. Piping both your precious audio and video cargo alongside those all important data packets, Belkin’s Thunderbolt hub can also daisy chain additional Thunderbolt accessories to neatly unify all of your devices onto one cable. Only $299, look for Belkin’s Thunderbolt Express Dock to be available September 2012.

If you need big honking storage, Wester Digital has announced the My Book Thunderbolt Duo, which pairs two 3.5-inch 2 TB or 3 TB drives together, making this the accessory to own if you store lots of video. With four 6 TB models daisy chained at Western Digital’s CES preview event, the company was able to achieve 24 TB of attached storage space. Early results showed average write speeds of 450 MB/s, with read speeds maxing out at 760 MB/s with the Mac used for demonstration. The My Book Thunderbolt Duo will be Mac exclusive at launch, but Western Digital is looking to make it PC compatible ASAP. There’s currently no price point or release date, but the products will be formally announced at Macworld | iWorld later this month. 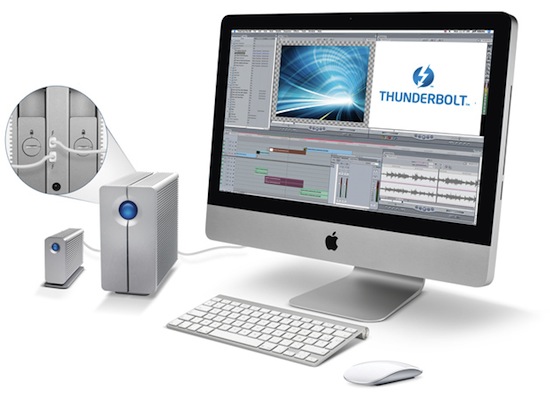 If there’s one thing you should know about storage, it’s that you can never go 2Big (sorry — I had to). LaCie’s 2Big is another Thunderbolt equipped external hard drive solution that’s able to daisy chain with other Thunderbolt solutions, housing two 3.5” drives that are hot-swappable. The 2Big will support up to 8 TB of storage in a RAID 0 configuration, or 4 TB in RAID 1, and has transfer rates up to 311 MB/s. No pricing has been announced, but you can expect to see the product in the first quarter of 2012.

Want the best performance from an portable external drive that money can buy? One solution is OCZ’s Lightfoot, a portable Thunderbolt drive that will be available in 128 GB, 256 GB, 512 GB, and 1 TB solutions with promised 750 MB/s transfer rates for the professional industry. OCZ’s Thunderbolt SSD isn’t for average consumers — these bad boys will set you back an expected $250 for the 128 GB model, and $2000 for the 1 TB model. No pricing or release date has been announced, but OCZ promises low latency and accurate time-synchronization for A\V users who need a portable high-performance storage solution on the go for when it lands later this year. 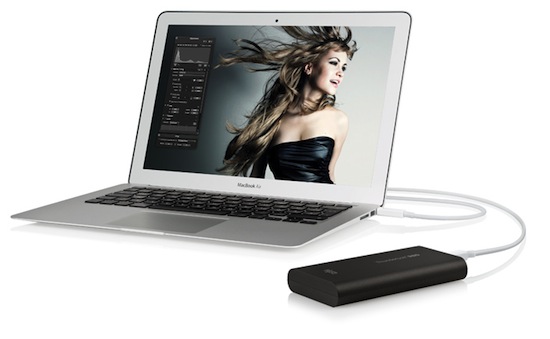 Elegato makes some nifty dongles for turning your Mac into your home television hub, but now they’re getting into the storage game as well. Elegato’s Thunderbolt SSD will come in 120 GB and 240 GB capacities and offers transfer rates of up to 270 MB/s (USB 2.0 is typically around 35 MB/s). Unlike the Lightfoot, Elegato’s solution seems to aim at the traditional consumer market as the company advertises quick transfer rates, noiseless operation, and a strong metal enclosure to keep your drive contents safe. Elegato’s speedy Thunderbolt SSDs will be available in February for €399.95 ($508) and €649.95 ($825).

Not only does ioSafe’s latest rugged hard drive feature a Thunderbolt port (obviously because of the name), it’s also thunderbolt proof. In a caged demo, the ioSafe kids were crazy enough to shock their latest portable hard drive with a bolt of electricity from a Tesla coil (which would render any ordinary drive useless). Of course the demo went off without a hitch and ioSafe continues the tradition of proving their tough drive solutions.

I haven’t seen specific pricing for the Thunderbolt model, but an announced USB 3 and Firewire version of the Rugged Portable drive will start at $149.99 and be available with aluminum HDD and SDD enclosures in capacities between 250 GB and 1 TB, and titanium SSD enclosures in 256 GB and 512 GB capacities. Thunderbolt specs aren’t yet available, and the Thunderbolt drive is scheduled for the second quarter of 2012. Click through to PC World to see the demonstration. 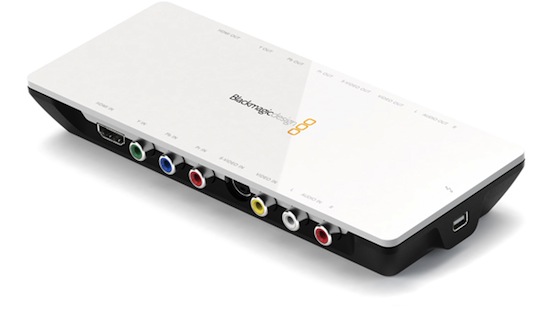 Capturing video? Perhaps you Mac gamers out there will find use in recording your latest CoD multiplayer matches from your Xbox 360 or PS3 with the Intensity Shuttle, an SD and HD video capture and playback device that utilizes Thunderbolt on your production Mac. This little guy has everything: HDMI, analog component, composite and S-Video inputs and outputs for recording compressed or uncompressed video from a variety of sources including camcorders, video game consoles, projectors, and big screen televisions. Requiring no external power, the Intensity Shuttle can record up to 1080p HD video that’s broadcast quality since all of that visual data is taken directly from the source (no futzing around with SD Cards or optical media). Best of all, the Intensity Shuttle is compatible with tools like Adobe Premiere and Apple’s Final Cut Pro so you can immediately begin editing your recorded video. The best part? The Intensity Shuttle only costs $239 and will be available in the first quarter of 2012.

We’ll consider this an honorable mention. Utilizing Thunderbolt’s fat 10 GB/s bi-directional pipeline, MSI’s GUS II is a chassis with a PCIe slot that allows you to connect an external GPU. There’s currently no OS X support (unless the GPU is compatible), and you can’t connect external power as everything is powered via Thunderbolt, but maybe the gaming community would be open to the possibility of an external powerhouse pushing the latest games on a MacBook Air. There’s no price or estimated launch date, but the concept and possibility is interesting to say the least.