WWDC 2012 is being good to us this year, bringing us new MacBook Airs, MacBook Pros, a brand new MacBook Pro with Retina Display, an updated Mac Pro, and major software updates with Mountain Lion and iOS 6. While we couldn’t ask for anything more under the tree, we still have plenty of unmentioned stocking stuffers to go through, such as a brand new AirPort Express, a completely new iPad Smart Case, an updated Apple USB SuperDrive, and some other goodies including a Thunderbolt to Ethernet adapter and some new MagSafes.

The new AirPort Express is tinier and better than ever. Still one of Apple’s smallest products, the new AirPort Express takes styling cues from the Apple TV, AirPort Express, and Time Capsule — it’s a small white box that plugs into the wall with a traditional power cord (perhaps making this model slightly less portable than the previous models). The latest AirPort Express features Ethernet WAN and LAN ports, an analog / optical audio out port for connecting to your home audio system, and dual band Wireless N Wi-Fi that takes advantage of the 5 GHz and 2.4 GHz spectrums. For company, a guest network can also be created to accomodate family and friends, isolating your personal network. It’s a very cool update — perfect for small apartments and condos, or even college dorms. The AirPort Express is $99.

To support the AirPort Express and the growing requirements for IPv6, Apple has released an updated AirPort Utility for iOS that takes advantage of the new networking device. You can download it from the App Store for free. 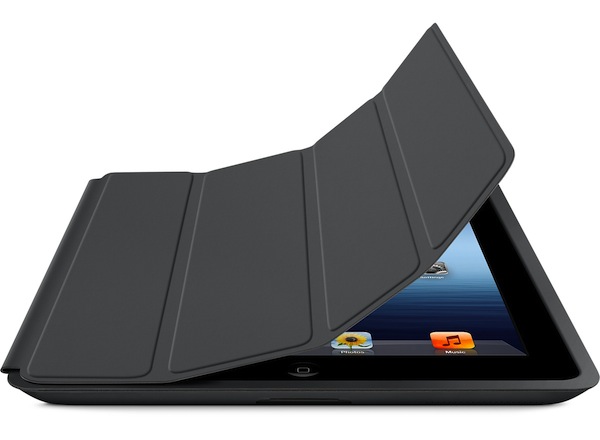 While the Smart Cover is pretty great already, Apple has also released a brand new Smart Case that provides full front and back protection. The full cover, polyurethane cases come in gray, dark gray, blue, green, pink, and red — it is a completely new case, and not just a backing for the Smart Cover. The soft front cover still automatically wakes and puts your iPad to sleep, while the backing protects the remainder of the iPad from bumps and scratches. The case covers the volume and power button, but leaves spaces open for connecting cables and headphones. The Smart Case comes in at $49 (cheaper than leather Smart Covers while offering more protection), and has the option of being engraved. The engraving option is particularly neat — you can give these as a gift with a custom message without having to worry about the permanence of the message on an iPad itself.

Apple’s USB SuperDrive has been updated, and still performs the obvious task of hooking up to your Mac Mini, MacBook Air, or your new MacBook Pro with Retina Display for burning discs, reading data, ripping music from CDs, and  installing applications from DVDs. There’s not much to say other than it’s a general refresh — it’s $79.00 from Apple and supports the latest announced products. 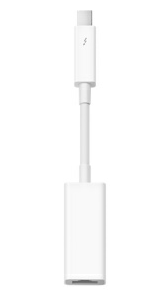 In the world of all things cables and power, a new combined Thunderbolt to Gigabit Ethernet Adapter has been released for $29.00 to give you an incredibly fast connection to high-speed networks. New MagSafes have also been released alongside new MacBooks. The updated MagSafes, promptly named “MagSafe 2,” take advantage of updated connectors on newer MacBooks. Here are the respective MacBook Pro with Retina Display and new MacBook Air MagSafe 2 Power Adapaters:

Also available is a converter that lets you use your new MagSafe 2 MacBooks with connectors that are still found on Apple products like the Apple ThunderBolt Display. The MagSafe to MagSafe 2 Converter is only $9.99.

If you’re looking to blast tunes on a shinier iTunes, look for the 10.6.3 update that’s now available from Apple’s download page, or you can simply hit up Software Update. The latest iTunes is compatible with the iOS 6 beta, Mountain Lion, and fixes a bunch of bugs and syncing issues.

There aren’t any new features according to the release notes, but Apple’s Final Cut Pro has been updated to take advantage of the new MacBook Pro Retina display.

So there you have it! If we see anything else, we’ll be sure to update this list with other products that have sneaked under today’s radar. Apple’s new Smart Case will make many iPad owners really happy, and the new AirPort Express will go great with a new MacBook as kids head back to college later this year. On that note: don’t forget to check out Apple’s just launched Back to School event, which gives students a $100 gift card with the purchase of a new MacBook or a $50 gift card with the purchase of a new iPad. All of these products are shipping from the online Apple Store as of now.