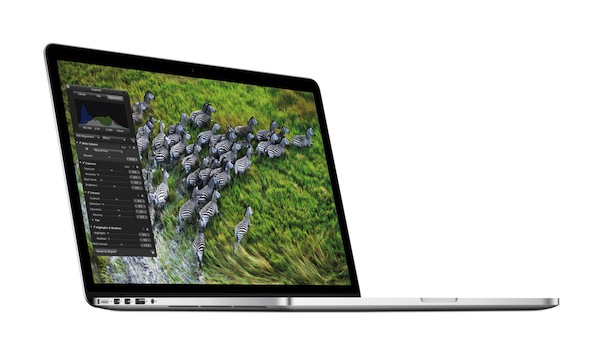 Following updates to the MacBook Air and old MacBook Pro line, Apple’s Phil Schiller formally took the wraps off the “next generation MacBook Pro” at WWDC today. Featuring an “architecture for the future”, the all new MacBook Pro comes with a new thin and light design that is inspired by the MacBook Air, and carries over the tradition of powerful specs of the Pro family.

To “be bold and embrace new technologies”, the new MacBook Pro is a true breakthrough in engineering: it’s 0.71 inches thin, and weighs only 4.46 pounds. It’s the lightest Pro notebook Apple ever made, and it carries a 15.4-inch, 2880x1800 “Retina” display for high resolution. at 220 pixels per inch, the new MacBook Pro has 5,184,000 pixels and it’s the highest resolution notebook in the world. According to Schiller, the quality of the display is “the best Apple has ever made”. Glare and reflection have been reduced by 75%, and the display features deeper blacks, higher contrast ratios, and higher view angles. Shipping with Lion, all Apple apps have been updated to take advantage of the Retina display: Mail, Safari, iPhoto have received updates; Aperture and Final Cut are receiving major updates as well. Final Cut, for instance, can show 9 simultaneous streams of pro-res video or 4 uncompressed streams.

Third-party apps will have to be updated for the Retina display on the new MacBook Pro. Apple says it is working with key developers, including Adobe, to have Retina-ready versions of popular apps soon.

The MacBook Pro with Retina display pushes the limits of performance and portability like no other notebook,” said Tim Cook, Apple’s CEO. “With a gorgeous Retina display, all flash architecture and a radically thin and light design, the new MacBook Pro is the most advanced Mac we have ever built.

The MagSafe had to be made thinner to fit into this new design; the machine also comes with a completely new stereo system, FaceTime HD camera, and dual microphones.

The new MacBook Pro Retina display is the world’s highest resolution notebook display with over 5 million pixels, 3 million more than an HD television. At 220 pixels-per-inch, the Retina display’s pixel density is so high the human eye cannot distinguish individual pixels from a normal viewing distance, so text and graphics look incredibly sharp. The Retina display uses IPS technology for a 178-degree wide viewing angle, and has 75 percent less reflection and 29 percent higher contrast than the previous generation.

In a video shown on stage, Apple’s head of design Jony Ive suggested the new MacBook Pro may seem like a contradiction. Built for performance but extremely portable, the new MBP features typography sharper than a printed page, and insanely fast performances thanks to solid state storage. One of the most important challenges Apple engineers had to face was designing the new display, which is built into the unibody construction and assembled through state of the art automated robots. 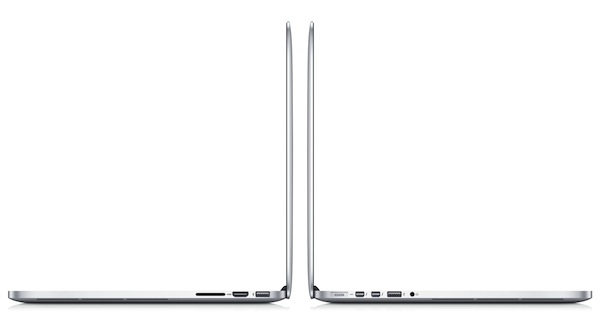 Starting today, customers who purchase a Mac will also get a free copy of Mountain Lion when it ships later this summer.

Apple is showcasing the new MacBook Pro with Retina display to WWDC attendees. 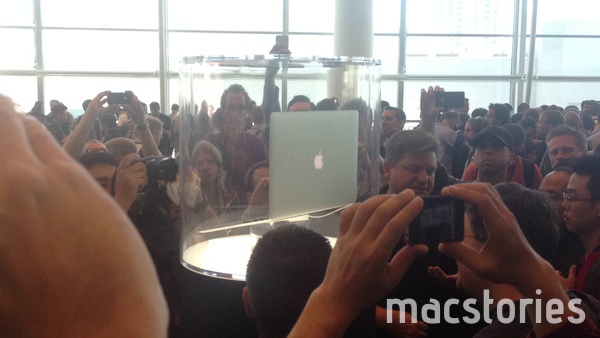 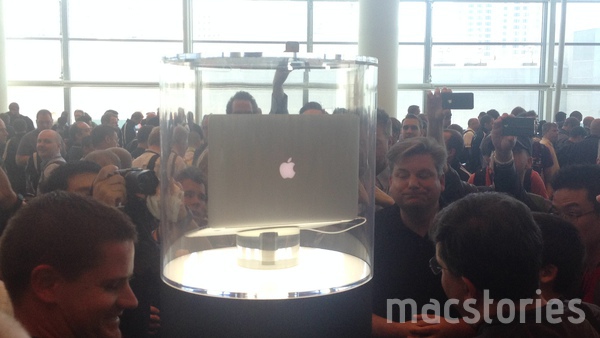 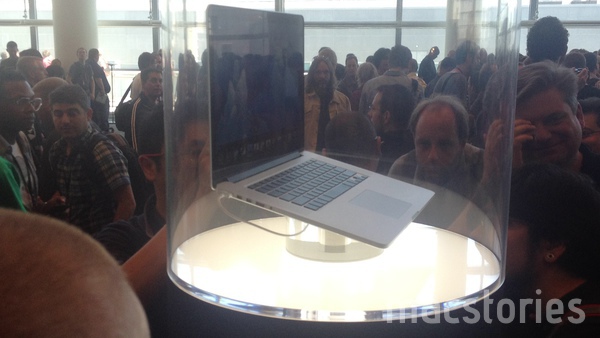 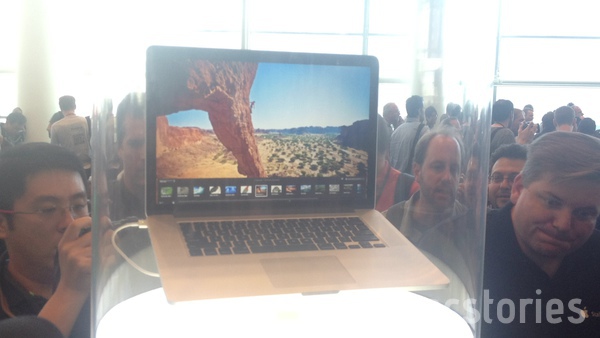