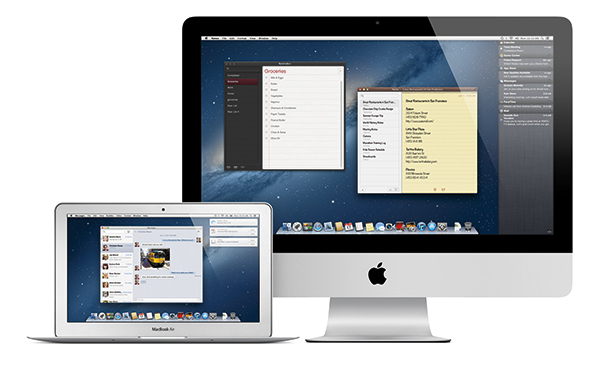 While Apple’s Mountain Lion has been coolly waiting for its chance to pounce on Apple’s website, Craig Federighi announced at WWDC 2012’s opening Keynote that the next big cat will be available next month (no specific date given) for only $19.99 from the Mac App Store.

“With iCloud built right in and the new Notification Center, Messages, Dictation, Facebook integration and more, this is the best OS X yet.”

Mountain Lion brings OS X closer to iCloud thanks to a community of integrated apps and services that allow for seamless syncing of Mail, Notes, Reminders, Calendar events, Contacts, and Messages. In addition to these iCloud enabled apps and services (which we’ve long been familiar with), Apple is introducing Documents in the Cloud.

Documents in the Cloud is a new feature that integrates with Apple’s iWork suite and enabled third party apps to bring you documents that are stored in iCloud. In his demo, Federighi opened Pages which brought an iCloud-based document library. In Mountain Lion, Documents in the Cloud is enabled for Pages, Numbers, Keynote, Preview and TextEdit. The new document library browser provides a simple way to access recent documents no matter which device you access them from. Apple will be making available an SDK so developers can use this feature for their own apps. 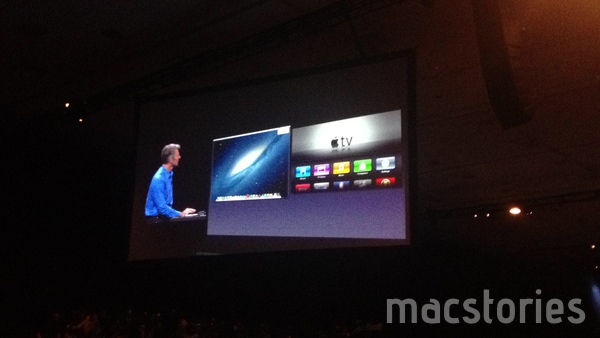 Game Center, a brand new Safari with a unified search field, and AirPlay mirroring, and greater accessibility for China were also shown off. AirPlay mirroring lets you send up to a 1080p quality secure video stream or an audio stream to an AirPlay receiver as iOS devices can.

While we’re talking about applications, I should take the opportunity to say that Gatekeeper on the Mac is completely user controlled. Outed as a feature that protects you from bad guys (my words), users can decide whether or not to trust 3rd party applications from outside the Mac App Store. Gatekeeper itself will check for security updates in the background, and it provides kernel ASLR for protection against buffer overflow attacks. Overall, it’s a solid security update.

Mountain Lion itself has something aesthetic changes — a brand new glass dock is seated at the bottom of the display, and the Notification Center icon has changed from its preliminary circle to an icon representing a list of items in the menubar. 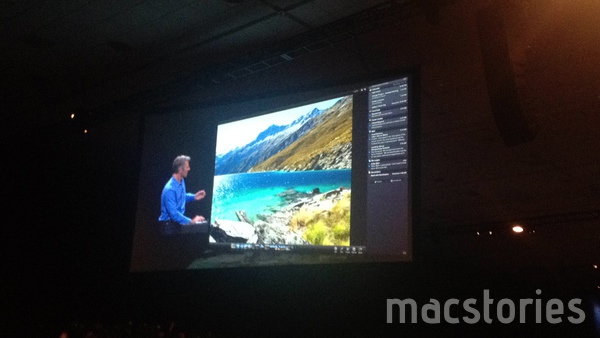 Given that you could dictate in iOS 5, it’s only right that the feature makes its way onto the Mac. Dictation really needs no explanation: “Anywhere you can type, you can now talk.” 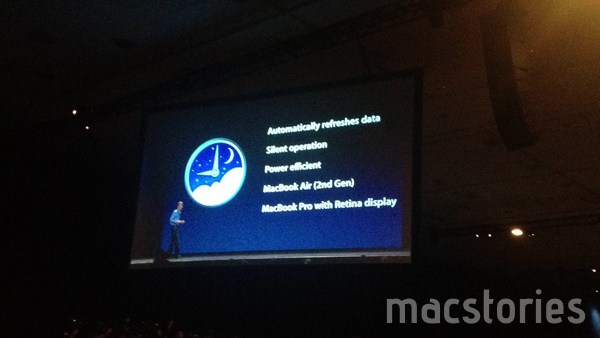 Power Nap is a feature we haven’t heard of before, letting your MacBook Pro with Retina Display or 2nd Gen (and above) MacBook Air receive data while it sleeps. All of the information you care about will be updated even before you open the lid — contacts, calendar events, emails, and other iCloud enabled services such as Find my Mac will work without user intervention. Even more amazing, your MacBook will be able to back up to Time Machine while in its Power Nap state. Supposedly, expected battery life should be maintained even when your MacBook is sipping power and downloading data while it’s asleep.

Customers who purchase one of Apple’s new MacBook Airs or MacBook Pros after June 11th will get a free update to Mountain Lion when it ships. Existing customers will be able to download it next month from the MAS. Today’s demo expounded what we already know, showcasing the rigidity of iCloud and new concepts that extends the Mac as an always active, lifestyle device. Mountain Lion’s integration with iCloud runs deep, and with over 1700 APIs available for developers, it’s a great release for developers and consumers alike.

SAN FRANCISCO–(BUSINESS WIRE)–Apple® today announced that OS X® Mountain Lion, the ninth major release of the world’s most advanced desktop operating system, will be available in July as a download from the Mac® App Store™. Mountain Lion introduces more than 200 innovative features including the all new Messages app, Notification Center, system-wide Sharing, Facebook integration*, Dictation, Power Nap, AirPlay® Mirroring, Game Center and the enhanced security of Gatekeeper. With iCloud® built into the foundation of OS X, Mountain Lion makes it easier than ever to keep your content up to date across all your devices.

“The pace of innovation on the Mac is amazing, OS X Mountain Lion comes just a year after the incredibly successful launch of Lion,” said Philip Schiller, Apple’s senior vice president of Worldwide Marketing. “With iCloud built right in and the new Notification Center, Messages, Dictation, Facebook integration and more, this is the best OS X yet.”

Using your iCloud account, Mountain Lion makes it easier than ever to set up your Mail, Contacts, Calendar, Messages, Reminders and Notes. The new Reminders and Notes apps help you remember important tasks and jot down your thoughts quickly, while iCloud automatically keeps everything up to date. Documents in the Cloud works with iCloud-enabled apps including Apple’s iWork® suite so you can always access and edit your documents on any device.

The new Messages app replaces iChat® and brings iMessage™ to the Mac, so you can send messages to anyone with an iPhone®, iPad®, iPod touch® or another Mac. You can include attachments, high quality photos and HD video, and your iMessages appear on all your devices so you can pick up a conversation right where you left off. iMessage includes group messaging, delivery and read receipts, typing indicators and secure end-to-end encryption. The Messages app also supports traditional instant messaging services, including AIM, Yahoo!, Google Talk and Jabber.

Dictation is built into Mountain Lion and allows you to dictate text anywhere you can type, whether you’re using an app from Apple or a third party developer. Mountain Lion also introduces Power Nap, an innovative new feature that keeps your MacBook Pro with Retina™ display and MacBook Air (second and third generation) up to date while it sleeps. Power Nap automatically refreshes Mail, Contacts, Calendar, Reminders, Notes, Photo Stream, Find My Mac and Documents in the Cloud, and when plugged in, downloads software updates and backs up your Mac using Time Machine®.

The revolutionary new Gatekeeper feature makes downloading software from the Internet safer by giving you control over which apps can be installed on your Mac. You can choose to install apps from anywhere, just as you do today, or for maximum security you can set Gatekeeper to allow only apps from the Mac App Store. The default setting allows you to install apps from the Mac App Store and apps from developers that have a unique Developer ID from Apple. In addition to checking daily for security updates, Mountain Lion includes app sandboxing to keep misbehaving apps from compromising your system, and kernel ASLR for improved protection against buffer overflow attacks.

• AirPlay Mirroring, an easy way to wirelessly send an up-to-1080p secure stream of what’s on your Mac to an HDTV using Apple TV®, or send audio to a receiver or speakers that use AirPlay;

• Game Center, which brings the popular social gaming network from iOS to the Mac so you can enjoy live, multiplayer games with friends whether they’re on a Mac, iPhone, iPad or iPod touch;

• a faster Safari® with a unified Smart Search Field, iCloud Tabs that present your open tabs across your devices, and a new Tab View to quickly swipe through them;

• over 1,700 new APIs that give developers access to the latest core OS and web technologies, as well as the newest features of OS X, including Documents in the Cloud, Notifications, Sharing and Game Center.

*Facebook integration will be available in an upcoming software update to Mountain Lion.