In 2010, we wrote about an interesting Kickstarter campaign for an iPhone stand and tripod mount called Glif. Simple and elegant, the Glif allowed you to easily mount an iPhone 4 on a tripod or act as a kickstand to prop it up at an angle. After the Kickstarter success, the duo behind the project, Tom Gerhardt and Dan Provost, went on to form Studio Neat; in the past three years, they have released other products that include the Cosmonaut stylus, iPhone apps, and a book.

Today, Tom and Dan are back with an update to the original Glif (called, in a very iPad 3-esque way, “The New Glif”) that makes it adjustable for practically any smartphone size. From their description:

The Glif will fit virtually any smartphone, between 58.4–86.4mm wide and 3.1–12.7mm thick. Some exceptions include “phablets” like the Samsung Galaxy Note, or phones with incredibly bulky cases. 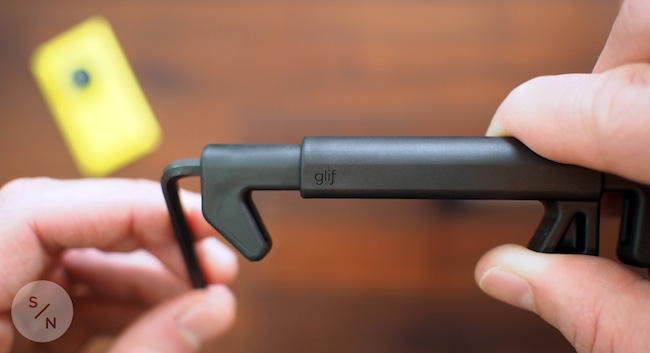 With the new Glif, you’ll get a 5/32 hex key to adjust the device for your smartphone. Besides non-Apple phones, I think that having an adjustable Glif is a good idea for users who like to keep their iPhones cases that don’t fit with the original Glif design (which is still available for purchase).

The new Glif is $30 and available here.