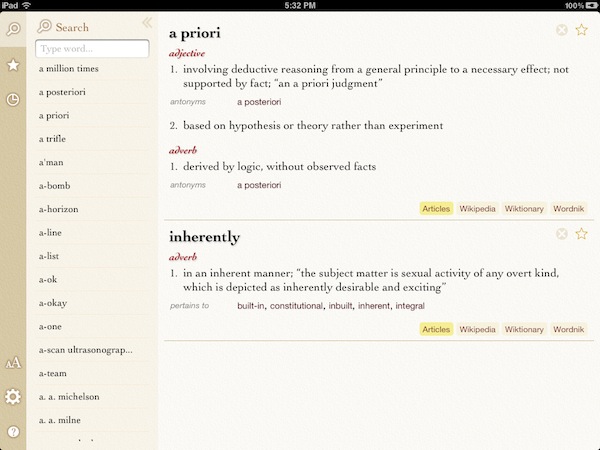 Terminology, the dictionary & thesaurus app for iPhone and iPad that was recently integrated with Mr. Reader and Instapaper, got a major update on both platforms earlier today, reaching version 2.0 and adding a number of features aimed at enhancing and better integrating the Terminology experience with third-party apps, and online services. First off, Terminology 2.0 comes with a rewritten user interface that doesn’t look different from the previous version, but brings performance improvements and faster response times that should make browsing through words and definitions even faster than before. Terminology has always been a lightweight app with an elegant UI and very little clutter, yet this new update wants to make things more stable and streamlined.

For example, the rewritten user interface allows you to pick different font and choose different font sizes. The selection includes Baskerville, Cochin, Georgia, Palatino and Helvetica Neue fonts, and can be made from a little popover menu in the bottom left corner. Alongside other minor improvements and the possibility of automatically getting results for clipboard contents, Terminology 2.0 shines when it comes to integration with apps and web services: for instance, you can activate links that will bring you to Twitterrific or Wikipedia client Articles (if installed), or open the selected word in Terminology’s companion website term.ly, which, by the way, looks really neat. 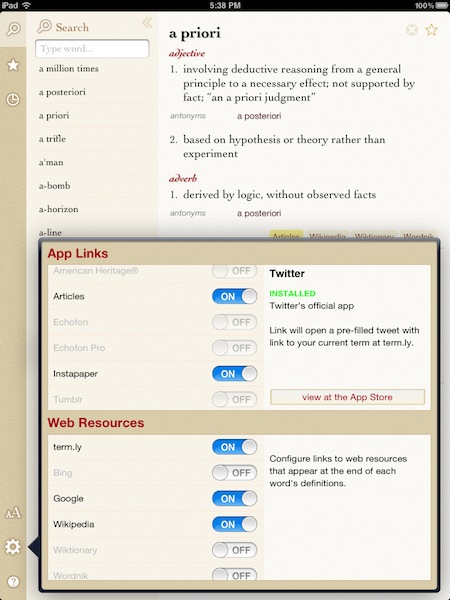 Articles support is very useful as well in the way it looks up the closest word to Terminology’s definition – example: “inherently” looked up as “inherence” on Wikipedia.

Terminology 2.0 is a free update for existing customers and can be downloaded at $2.99 here in its iPad version, or here if you prefer the smaller iPhone counterpart. Highly recommended – read our original Terminology review here.