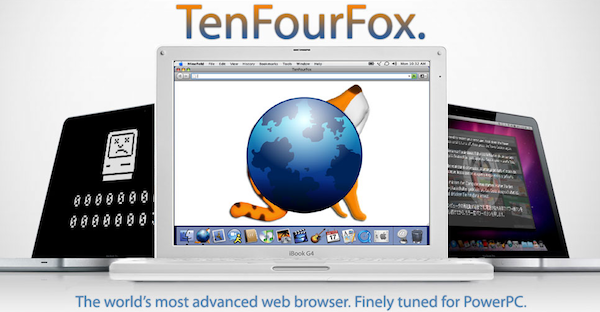 If you’re still rocking a PowerPC Mac with a G3, G4 or G5 processor running OS X Tiger and you’re willing to try the new Firefox 4.0, you’re out of luck. With the latest major update to their Windows / Mac / Linux browser, Mozilla dropped support for Mac OS X 10.4 and PowerPC architecture, and while it’s pretty obvious that, going forward, older machines and operating systems will be left behind by software vendors, it’s always nice to find alternatives and hacks that enable users who are “stuck” on these systems to enjoy the recent advancements in technology, although with some compromises. TenFourFox, a new project from the creators of the Classila browser for classic Mac OS, is a fork of Mozilla’s Firefox 4.0 that runs on older Macs powered by Tiger and PowerPC CPUs.

But if there’s one thing we’ve learned from our years of using Macs, it’s that they outlast anything else out there. Why shouldn’t an iBook be able to look at embarrassing pictures on Facebook, or Twitter about our lunch break? These are our computers, dang it. We paid good money for them. They still work. There’s no technical reason they can’t do everything that a MacBook can. So if you want something done, you do it yourself, and we did. The result is TenFourFox.

The browser, available for download here, is a very niche product, but we’re sure it’ll manage to build a loyal following over the next months: it uses almost the same code of the official Firefox 4.0, but it’s been entirely rebuilt to add specific improvements for OS X 10.4 as it “restores the glue necessary to get most of Firefox 4’s advanced features working on our older computers” with separate builds for G3, G4 and G5 processors. TenFourFox includes most of the features of Firefox 4.0 you know and love: extended HTML5 and CSS3 support, faster Javascript rendering, WebM video, Firefox 4 add-on compatibility. According to the developers, the custom code deployed in TenFourFox granted faster Javascript performances than both Safari 5 and Firefox 3.6 through SunSpider and Dromaeo benchmarks. Apparently the code has been sent back to Mozilla so anyone could enjoy the improvements made by the team, and the devs also claims TenFourFox is by far the fastest web browser available on PowerPC Macs running Tiger. As for the requirements:

TenFourFox requires a G3 Power Macintosh, Mac OS X v10.4.11 or Mac OS X v10.5.8, 100MB of free disk space and 256MB of RAM. Video playback will be poor on systems slower than 1.25GHz; we recommend a G5. Intel Macintoshes are not supported (and will be mercilessly mocked).

You can find more information about TenFourFox here, and download the various builds on the project’s official Google Code page.