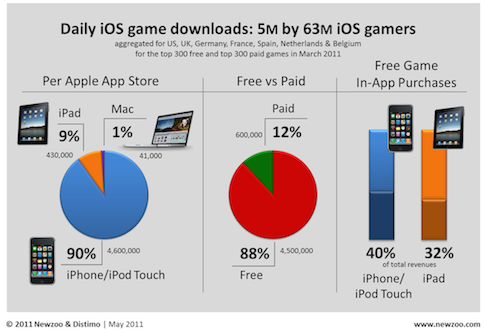 The National Gamers Survey, compiled by research firms Distimo and Newzoo from March data has revealed that there are roughly 63 million gamers on the iOS ecosystem who (individually) download, on average, 2.5 games per month. Games represent half of all apps downloaded across the iOS and Mac App Stores with more than 5 million games downloaded per day – based on the survey that included the US, UK and five other European countries. A clear majority of 4.6 million are downloaded for the iPhone or iPod Touch whilst just over 400,000 are for the iPad and just a sliver for the Mac with 41,000 per day.

The survey also revealed that in-app purchases within games is becoming an increasingly common feature found in games with revenue from in-app purchases also representing a large proportion of total revenues. 88% of the top 300 games on iOS are free, but across and free and paid games, two fifths of the revenue is now coming from in-app purchases. On the iPhone and iPod touch it represented 40% of gross revenue and 32% for the iPad. These high figures may give reason to why Lodsys has recently started to target developers that implement in-app purchases; it would certainly raise a lot of revenue if they received license fees from even just a portion of developers.

Some more statistical data about the spread of iOS devices was also revealed, noting that across some of the countries surveyed, including the US, UK, France and Germany, between 6% and 7% of the online population have an iPhone. Whilst of those iPhone users, between 50% and 75% play games. As for the iPad, the report claims 15 million Americans actively play games on it, whilst 7 million Europeans do so – exceeding the number of people using Sony’s PSP.