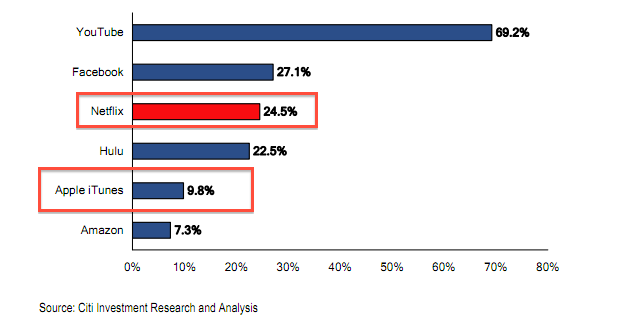 In a survey based on the results of a poll of an unspecified number of “Web users” over the last week, Citigroup analyst Mark Mahaney says Apple’s iTunes Store has roughly 10% of market share for online video. In the poll, the usual suspects are mentioned by users: YouTube leads with 69.2%, and surprisingly enough Facebook comes at #2 with 27.1%, leaving Netflix in the third spot with 24.5%. However, as the analyst notes, if you’re paying to watch web video, you’re using Netflix; neither YouTube or Facebook have premium subscriptions for videos in place, although Google’s video platform has tried several times in the past to expand to other possible profitable segments like live streams and movie rentals. However, the standard YouTube experience remains free and users are able to upload high-quality, HD videos without restrictions of sorts. These videos are then consumed on YouTube.com or connected devices such as the iPhone, iPad, Apple TV and Android handsets, thus making YouTube the leader of online video, without a price.

The “Hulu” seen in the graph above sits right below Netflix, but it’s worth mentioning that most of its visits come from free subscribers, and not Hulu Plus accounts. Similarly, Apple’s iTunes at 9.8% doesn’t include streaming options like its competitors – unless we consider the second-generation Apple TV as part of the reported 9.8% market share, but it’s unclear how many Apple TV units Apple sold since September 2010, and it’s also not clear which devices the users polled by Mahaney own. Apple was rumored to be planning an expansion in web video with the launch of a Netflix-like service, an Internet-connected television and a massive upgrade for iTunes video storage, though recent announcements at WWDC put the focus on iCloud as a delivery platform for iOS devices, rather than a video service. [via All Things Digital]