Steve Jobs is back in the air. Well not the Air (which apparently is doing great), but literally in the air with his private jet. Taking a look at Apple’s 10K form for fiscal year 2010, Fortune noticed a $93,000 reimbursement to Steve Jobs for private jet expenses in Q4 2010, namely fuel and pilot salaries.

Private jet expenses accounted to only $12,000 in Q3. Clearly Steve traveled a lot during the last quarter, and we can only speculate about the people he met and the deals he closed. 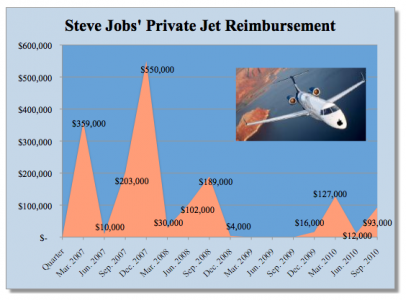 Steve Jobs’ record when it comes to jet expenses goes back to the first months of 2008, when he was reimbursed $550,000. That’s an awful lot of flights, but that’s also a few months after the release of the original iPhone and months before the iPhone 3G announcement. Apple was closing hundreds of deals with several 3G providers worldwide, so it’s no surprise Steve managed to fly for half a million dollars.

What happen in Q4, though? Well, CDMA contracts with carrier might be one of the reasons behind the spike in expenses, just like visits to the facilities that were working on the white iPhone 4.

Or maybe he was just checking on the status of the iPad 2 and iPhone 5.