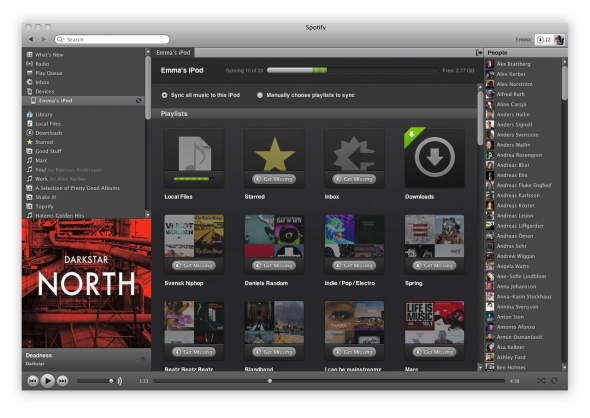 Spotify, the music streaming service that counts millions of active users in Europe but has been struggling to launch in the US due to the lack of deals with major music labels, announced some important new features last night, both for Premium and Free users. With an update to the official desktop app that will automatically roll out to all users in the next few days to “ensure technical quality”, Spotify now allows you to sync your music to an iPod Classic, iPod Shuffle or iPod Nano without using iTunes at all. With the new Spotify, users will be able to place the MP3s they bought (more on this in a minute) or saved locally inside a playlist (as they usually do) and sync these playlists to an iPod thanks to the new “Devices” section in the app’s sidebar. It’s worth noting that Spotify doesn’t allow sync via USB cable to iOS devices, as they’re only focusing on standard iPod models now. However, with the updated mobile app for iPhone and iPod touch (now also available to free users for playlist sync, whilst Premium subscribers retain the ability to stream everything) users get the possibility to sync playlists wirelessly. Clearly, Spotify has set out to become the standard music player for many both on the desktop and mobile devices, although the software still can’t sync back to iOS devices like iPhones and iPads through a USB cable. Plus, the lack of a native iPad app still makes it impossible for iPad users to properly enjoy the Spotify experience.

For the first time, seamlessly manage any iPod classic, iPod nano and iPod shuffle in Spotify. Simply connect your iPod to your computer via your USB cable and watch it magically appear in the new ‘Devices’ section of your Spotify sidebar.

iPod integration was your biggest request, but there are also a lot of Spotify Free users out there who are iPhone and Android phone owners. You asked for the ability to buy your MP3 playlists and sync to your phones. So we’ve got you covered too…

As of today, everyone can download the Spotify Mobile iPhone & Android apps to wirelessly sync your MP3 playlists in Spotify from your computer to your phone. Fire up your mobile app and see your phone appear in the ‘Devices’ section of the Spotify sidebar, ready to rock and roll. No cables required!

As mentioned above, users can now take the music they bought or already own on the go all the time. Spotify is, in fact, launching a new “download service” that, through a simple click&buy interface, allows you to purchase a range of MP3 bundles offered by the service starting at 50p per song. I haven’t managed to test the new music store and iPod Classic integration as the update is still rolling out and I don’t have it available, but from what Spotify unveiled last night, it really looks like the company’s intention is to take on Apple and (the future) iTunes with a mix of streaming, local cache, USB sync, and online store. The variety of apps offered by Spotify surely gives them an important head start in the music streaming scene for mobile devices, but they obviously still can’t compete with the music catalogue offered by iTunes. And when Apple finally rolls out is iCloud service for music with iTunes integration, it’ll be interesting to see how Spotify will react.