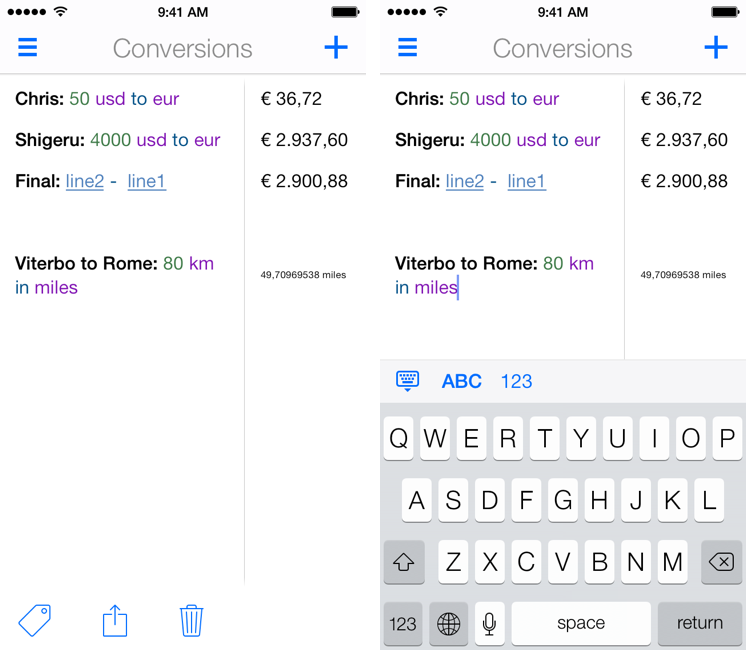 I’ve written about Soulver before: a calculator that isn’t really a calculator, Soulver lets you work with numbers for calculations and other operations using text commands across multiple lines. Soulver is, in a way, the Fantastical of calculators: using natural language, it lets you do quick calculations without having to tap dozens of buttons or scroll long menus. As the developers call it, Soulver is a “notepad calculator”.

Considering iOS 7’s focus on typography and legibility, I was looking forward to seeing how Acqualia would update Soulver (which is heavily text-based) to take advantage of the new OS, and I wasn’t disappointed. Version 2.3, released today, builds upon the app’s existing feature set to offer a redesigned interface (and icon), more unit conversations, and syntax highlighting.

If you’ve used other iOS 7 apps like Byword, you know how syntax highlighting is beneficial to the user experience: numbers turn green, units are purple, operations are blue, and plain text is standard black. Syntax highlighting makes lines more scannable because operations and individual bits of text stand out more; furthermore, because Soulver allows you to type units manually (you can write “USD”, “usd”, “dollars”, etc) you’ll instantly know if what you typed has been recognized by the app thanks to color highlights. Besides being nice visually speaking, syntax highlighting – a simple addition in theory – makes the experience of using Soulver considerably better.

With the update, Acqualia has added new unit conversion types, which come in handy for people who, like me, often trigger the app using a URL scheme that lets them type queries in apps like Drafts or Launch Center Pro. Like Fantastical, I’m faster at writing with natural language on my iPhone than tapping menus and lists, so the addition of more units allows me to use Soulver as the primary unit converter app on my device.

Soulver 2.3 includes other design improvements such as simplified navigation and easier access to total when the keyboard isn’t shown. The app hasn’t been updated on the iPad for almost a year now, and I hope that Acqualia is working on an iOS 7 update for that platform as well. Soulver 2.3 for iPhone is $2.99 on the App Store.