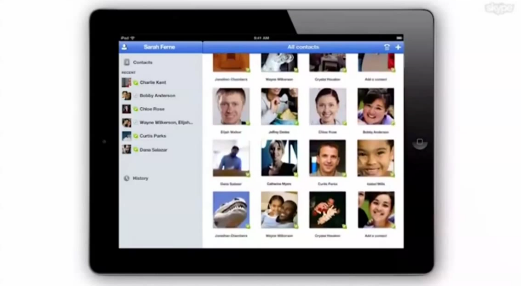 As reported by Italian website iPadevice [Google Translation], a video appeared earlier today on Skype’s official YouTube channel, and was later removed or set to private. The video demonstrates the official Skype application for iPad, which appears to be complete and launching soon. The video has no audio, and iPadevice managed to grab a copy before it was deleted to re-upload it to YouTube. The video says “Skype for iPad, available on the App Store”, though it’s not clear whether or not the app will be released as a universal update to the existing iPhone client, or as a standalone app. However, the video shows that Skype has taken its time to take advantage of the iPad 2 hardware to enable video calls both through the back and front facing camera, with a visual contact list made of profile pic thumbnails you can scroll, as well as the possibility of turning a video call into fullscreen mode.

The app will have options to call, video call and chat with a contact; it will work both on WiFi and 3G as a disclaimer at the beginning of the video says, and it will allow users to chat during a video call session from a popover menu at the bottom.

Skype was recently acquired by Microsoft for $8.5 billion, and although after the acquisition many feared Redmond would make the software exclusive for its devices, Microsoft’s Steve Ballmer was quick to reassure everyone that Skype was still committed to other platforms. Check out the video below.

Update: Here’s the alleged link of the private video, via RazorianFly. 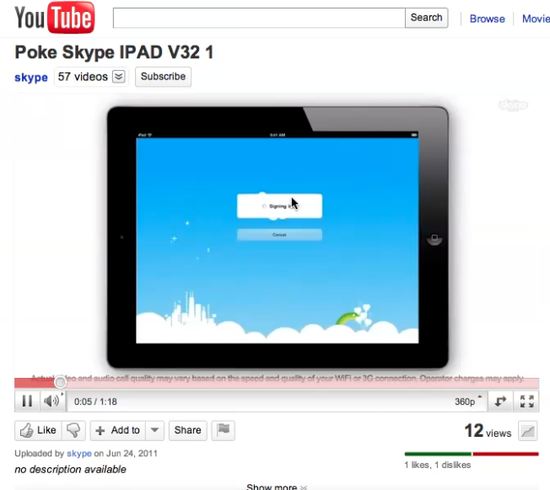 Right now, Skype has 56 uploads on YouTube, whilst the screenshot shows 57 before the video was pulled.

Update #3: TUAW’s Mike Schramm has confirmed with Skype VP of Consumer and Product Design Rick Osterloh that the app is very real and hopefully coming soon depending on Apple’s approval. Skype says some desktop features like file sharing couldn’t be implemented, but called the iPad version a “solid release” and said Apple has been very supportive to them.

Osterloh says that the iPhone version of Skype burst out of the gate quickly, with a big launch and “a userbase that doubled in just a month’s time.” And he said the iPad version should “have a similar success,” especially since it’s basically the same in functionality: chatting, audio and video calling, and all of the other standard actions you can expect from Skype. The current app has been in testing for a few months now, and Osterloh is excited to unleash it on the public.