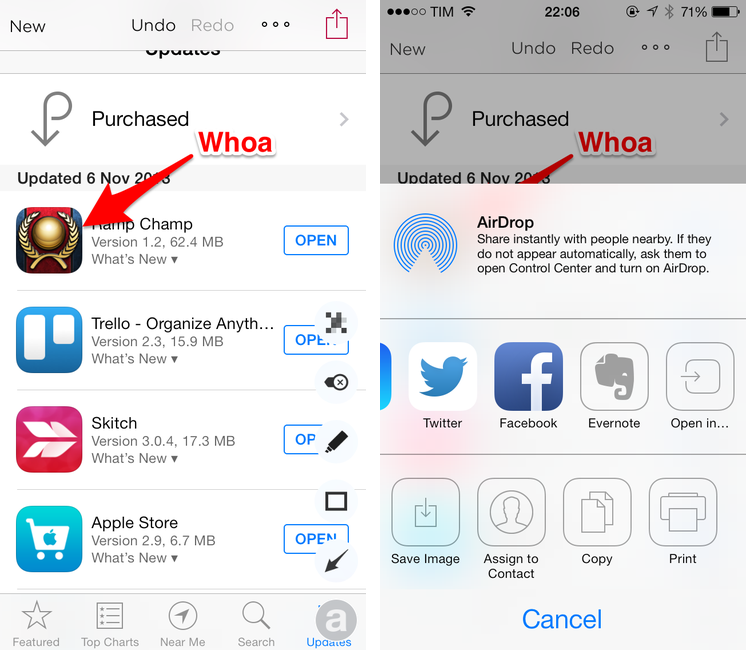 Released in late September, Skitch 3 for iOS was a great reimagination of Skitch, but it lacked some handy features like Maps integration and an Open In menu to send annotated images to other apps. I called Skitch 3 “a fun, quick annotation app with a lot of tools but a focus on speed and straightforwardness”, noting how it became my go-to image annotation app (again).

With today’s 3.0.4 update, Evernote has brought a series of minor but welcome enhancements that make Skitch more powerful and integrated with other iOS apps. Notably, an Open In option has been added to the sharing menu, allowing Skitch to send annotated images directly to iPhone and iPad apps (in my case, Droplr).

As detailed on the Evernote blog, other additions include an overflow menu that contains a Crop function and a “Clear All Annotations” shortcut; possibility to annotate your current location on a map view; and new controls for Evernote notebooks. While Skitch 3 wants to be an annotation app that can be used without Evernote sync, users who want to send images to Evernote can now choose a default notebook in the Settings.

I like today’s Skitch update, especially for Open In support (my Skitch > Droplr > Tweetbot is now much simpler). Skitch 3.0.4 is available on the App Store.