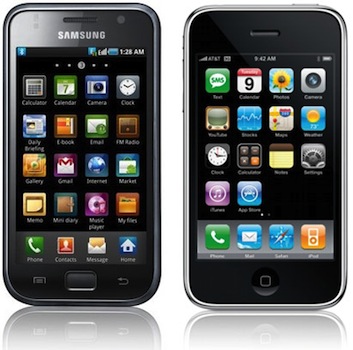 In a counterclaim to Apple’s lawsuit filed earlier this week, Samsung said today in a statement that Apple’s iPhone and iPad infringe on 10 of Samsung’s patents and has called for Apple to stop infringing the patents and pay Samsung compensation. Filed in the Seoul Central District Court, the patents involved largely cover technologies surrounding power conservation during data transmission, improving the 3G data transmission and various wireless data communication technology. In a press statement, Samsung said it was

The litigation between Apple and Samsung is set to be a heated one and Apple is going after Samsung hard, with Apple earlier this week saying to the press “this kind of blatant copying is wrong, and we need to protect Apple’s intellectual property when companies steal our ideas.” Meanwhile, Apple will continue to be Samsung’s second largest client for various electronic components, which go into the very products that Samsung is alleged to have copied, and last year it brought in $5.7 billion of revenue to Samsung.

Author of a book on Samsung and professor at the National University of Singapore, Chang Sea-jin, said to the Financial Times that such legal spats are common and are unlikely to threaten the business relationship between the two companies, he believes that “Apple is just sending a warning to Samsung that they are watching them.” It has also been suggested that Samsung has in the past actively persuaded Steve Jobs that the electronic components sector of Samsung would not in any way leak or reveal information about Apple’s future component needs to the Samsung mobile unit.