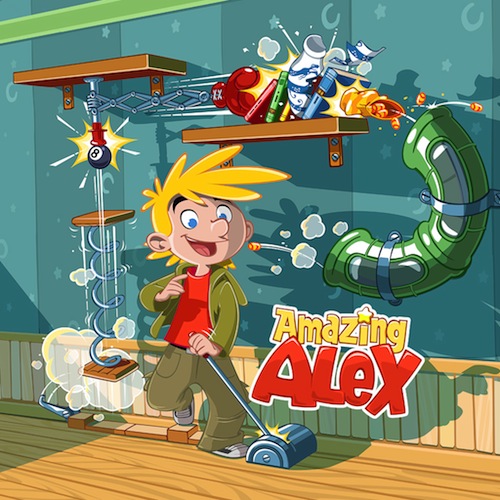 Initially teased back in May, Finnish game maker Rovio formally announced its next game for iOS and Android today, launching a dedicated website, a set of wallpapers, and a video to reveal more details of the upcoming title. Coming “in July 2012” for iOS and Android (in May, Rovio said the game would launch within two months), Amazing Alex will be a puzzle game focused on letting Alex – the main character – build chain reactions across different locations, levels, and using a variety of objects to create fun and engaging Rube Goldberg-like devices and machines.

Rovio acquired the game from developers Snappy Touch and Mystery Coconut – it was originally called Casey’s Contraptions – and reworked it with a new physics engines, new graphics, and further developing the character of Alex.

Whilst it’s still unclear whether Amazing Alex will be a paid title or a “freemium game”, Rovio is already promising 100 levels, regular free updates, 35 interactive objects, and the possibility of building and sharing puzzles with your friends. A promo video posted on Rovio’s website (and also embedded below), doesn’t show any actual gameplay footage, but suggests a highly colorful and distincitive setting for the game.

You can check out the teaser site for Amazing Alex here, and follow @amazingalex on Twitter for future updates.