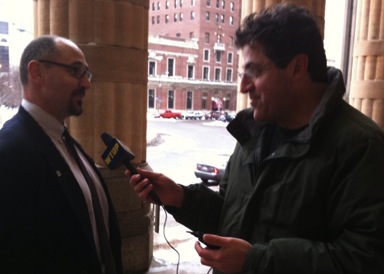 A decade ago Neal Augenstein packed and took with him a suitcase full of heavy equipment so that he could cover news events in the field for the WTOP radio station. Today? It’s an iPhone 4, iPad and a few accessories.

As a radio reporter, the fundamental aspect for Augenstein is audio capture, currently that role is fulfilled by the iPhone 4’s inbuilt microphone (the third-party one he used to use with his 3GS doesn’t yet support the iPhone 4) and whilst it isn’t quite up to the quality he previously experienced, he says it is 92% as good as before. For audio editing he uses the VC Audio Pro app that lets him quickly and easily pull cuts, edit, assemble and adjust the volumes on a three-track screen. This is Augenstein’s favorite improvement on his previous workflow, because he is now able to push out a report in something like 10 minutes rather than 30 minutes.

For live reports Augenstein experimented with two expensive options but left unsatisfied went with the tried and tested Skype which gives him (and his station) a free VoIP service that he says “often sounds as good as the pricy apps”.  Twitter has also become a complementary avenue of reporting and he writes that he will often “break stories on Twitter, and follow-up with audio and website reports.”

Augenstein also carries an iPad primarily for taking down notes during press conferences and a “jury-rigged” stand for the iPhone for when there is no podium to place the iPhone on. In essence Augenstein highlights the very benefit of ditching his old equipment for the iPhone 4 when he says: “I can produce intricate audio and video reports, broadcast live, take and edit photos, write web content and distribute it through social media from a single device.”