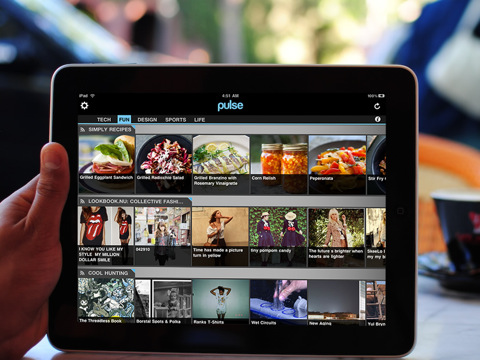 Pulse, the social news reader for iPad, was updated last night to include a number of optimizations and new features. With the release of the new Flipboard a few months ago, Pulse had to play catch-up to face the iPad app of the year, which was updated with better Facebook integration, Google Reader support and huge improvements to the interface and navigation. Pulse, however, was never based on the same concept of Flipboard: where Flipboard is a social magazine that aggregates content from Twitter, Facebook and Google Reader, Pulse is a wall for your news. Moving out of RSS feeds to embrace Facebook links confirms the news wall theory.

The latest update to Pulse is aimed at enhancing speed and Google Reader sync. The app will now store changes offline and sync them back as soon as an internet connection becomes available. On the engine side, Alphonso Labs improved image loading times, refresh and scrolling, which feels much smoother now. The app was never really fluid for me, and I expect things to get even better once the iPad 2 with a faster processor ships.

Images can now be saved to the iPad’s photo library, and search has been refined to direct you to proper news sources. There is no doubt Pulse is getting better over time, however I would like to see a redesign of the interface, which I believe has fallen behind the elegance and minimalism of Flipboard.