Back in April, Cody Fink posted a very thorough review of the 1.0 release of Kiwi for Mac, but now it’s time to follow up with a little sneak peek of version 2 - due out tomorrow, November 24. Yourhead, the company that makes Kiwi, has given me a little taste and I have to say the new version adds some great new features to an already very nice Mac desktop client.

Kiwi, for those who don’t know, is a very customizable twitter client, different than most out there. You can use different themes, and it has a great advanced filtering option (which ALL clients should have these days), but this is nothing new for Kiwi. What is new in version 2 is the price, tabs, multi-window UI, user profiles, more default minimalist themes and some other small things and overall app refinement. Let’s get started.

The most important decision for version 2 is the price, it was $9.95 before but version 2 will be FREE (with BuySellAds), people who have already purchased the app or register the new version for $9.95 can hide the ads. When the ads pop down (and only on one window), they are just 102 pixels tall, which is comparatively the same height as those on Twitterrific and EchoFon and are well-targeted towards Mac users, see image: 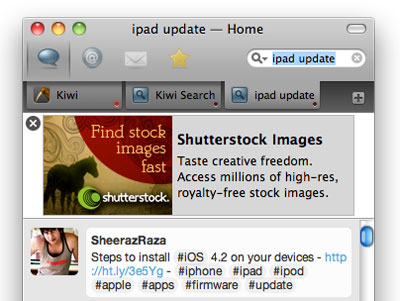 Tabs is one of the biggest new features. Multiple accounts now display as tabs in the main window and viewing conversations or user info pops up as new tabs as well, just like Safari.app on the Mac. You can also can drag the tabs around to organize them, or pull them out to create a new windows. Tabs can also be used to add a specific keywords search, say MacStories, or a tab just for a certain user you don’t follow but want to keep an eye on.

Kiwi is no longer limited to viewing a single timeline window, like EchoFon or Tweetie, but can display a multi-window UI on your desktop for the information hungry, like Hootsuite or Tweetdeck.

When you click a user’s avatar, the new profile box swings down (very cool animation) with a detailed view of their stats. The Follow/Unfollow and Block buttons are nice and large too. You can hide this box in 2 ways, one is obvious - hit the close button and it disappears but for a little extravagance, try clicking back on your timeline and the profile box does this hanging-drop animation and falls off the timeline - nice attention to detail and nice effect, Yourhead is known for great subtleties like this.

Kiwi has a bunch of flashy, some being over-the-top, themes but for version 2, a few minimal choices were added to simplify the UI. “Pure” and “Light” are bundled with the app, both basic and “take a form-follows-function approach.”

Isaiah Carew, the ‘head noggin’ behind Yourhead, told me that “lots of effort has been put in to refine and simplify the user experience and the interface polish.  It was a top-to-bottom effort: refined keyboard shortcuts, new icons, new graphics, gestures, and preferences.” Yourhead has also posted a teaser video of the app in action:

A few things to mention though. As Cody noted before, Growl gets a workout when Kiwi is running in the background - it spits Growl messages for every new tweet in your timeline; this is nice for @replies or DMs but when you follow around 400 people, it can be a bit jarring. I could not find a way in the Growl prefs to disable timeline alerts. Also, I would like to see more options for in-line image viewers and URL shorteners.

Overall, Yourhead did a great job making Kiwi 2 even better than Kiwi 1. The new features make this a contendor for anyone that wants a full featured and very customizable and rule based twitter client for the Mac. Doesn’t it feel good to say “Back to the Mac”?

DISCLAIMER: Kiwi is currently one of the great sponsors that help keep our site up and running. In no way shape or form does Kiwi warrant or make endorsements as to the quality and content of the review!