Hey all you soon to be Kiwi-heads! Before I even delve into such a review, we’re fully aware that Kiwi is currently one of the great sponsors that help keep our site up and running. In no way shape or form does Kiwi warrant or make endorsements as to the quality and content of the review!

So with that out of the way, we’re also fully aware that some of you are already touting Kiwi as your Twitter client of choice on your Mac machine. And these people also happen to be incredibly vocal about it. But for those a little leery of customization or other features Kiwi provides, let me show you around a bit. Even if you already own your copy of Kiwi, stick around anyway! 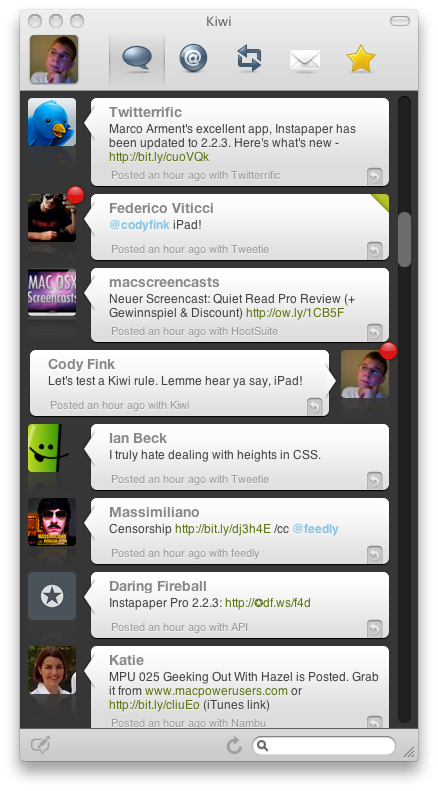 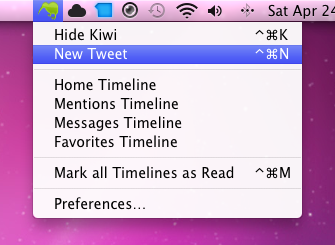 Kiwi appears to be your rather standard Twitter client. Rather huge icons depict your timeline, @ replies, retweets (from people you follow), direct messages, and favorites. At the bottom, we can compose a tweet, refresh the page, and search Twitter. All of your standard functionality is available so users can begin enjoying your timelines immediately. Kiwi also supports Growl support and the option to enable/disable a menubar icon for additional usefulness.

The one thing that irked me a little bit about Kiwi is how talkative it was. Initially things are going off everywhere - there’s more badges marking unread tweets than spots on a leopard, and growl is off the chain. Marking tweets as read involves clicking on the Tweet you read or using your up arrow key to scroll through selected tweets, but there’s any easy fix in the preferences which allows you to mark all tweets as read once you reach the top of your timeline (which makes it just like Tweetie in this sense). So once I made some minor adjustments, Kiwi became much more enjoyable to use. 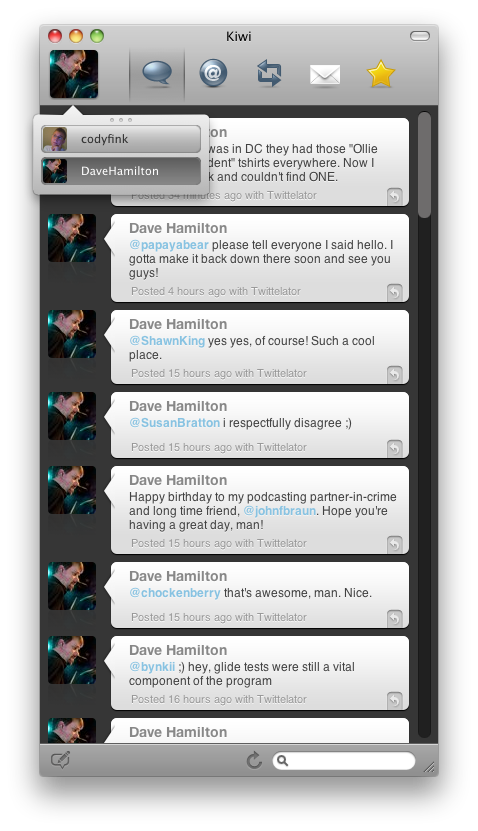 What’s interesting is that if you click a Tweeter’s (is that a Twitter term?) avatar, it replaces your user avatar with theirs and displays only their timeline. While I was expecting to view that user’s profile information at some point, delving into individual tweets and timelines offered no back button so to speak. You have to interact with the user icons (which once it you do it) feels okay. 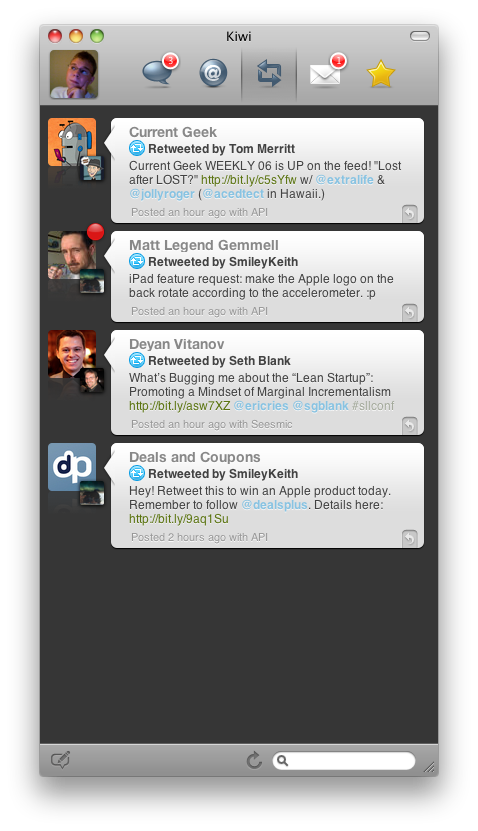 My absolute favorite feature of Kiwi has to be viewing retweets from people I’m following. Sometimes there’s juicy content I’d otherwise miss, and it puts it all in one place. On the other hand, Direct Messages work just like you’d expect from the Twitter - you don’t have threaded conversations like Tweetie, but rather inline messaging similar to Twitterific. I’m okay with that (for business use, however, I prefer Tweetie’s threads). 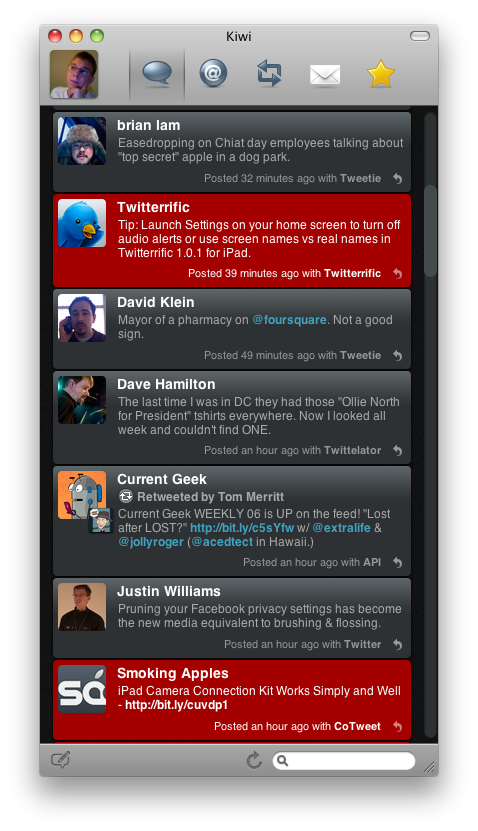 So with Kiwi’s interface down pat, I know you’re here for the theming. While the actual themes are hit and miss in the “pretty” arena, there’s lots to choose from. While not all themes translate to a coherent user experience (some just feel silly), I appreciate that are devoted users all around that contribute to making Kiwi better for everyone. I personally like the Pop theme, since it reminds me of Twitterific and is just a nice, clean alternative. 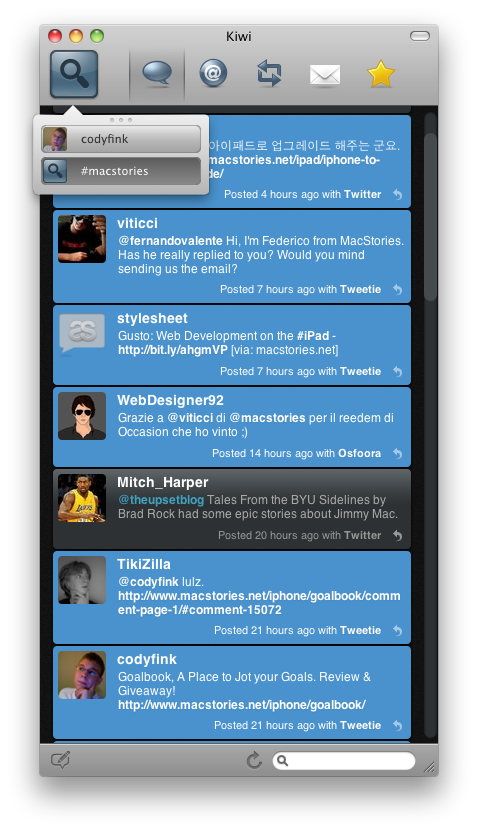 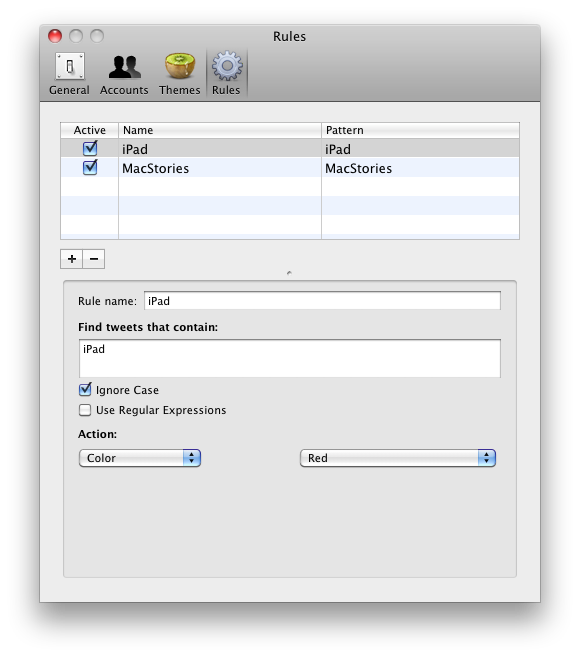 The last two, and ultimately differentiating feature about Kiwi, has to be how it handles accounts and rules. Kiwi allows you to keep tabs on multiple accounts, twitter searches (grouped searches as a matter of fact), and Tumblr feeds. It’s pretty cool that Kiwi extends it’s features in this manner. Lastly, Kiwi also allows you to define rules where you can perform actions automatically. For the example shown above, I can highlight tweets red if the word “iPad” shows up in my timeline. You can also apply your own CSS styles (which is pretty kickass).

Kiwi is a pretty powerful Twitter client when it comes to grouping accounts, keeping tabs on searches (and trending topics), and allowing you to apply rules to tweets. Simple on the outside, powerful on the inside, Kiwi doesn’t disappoint. So to share some of the love, we’re giving away ten licenses to our readers. Check out the rules below for more information! Thank’s to the folks at Kiwi for not only sponsoring us, but providing us with the review copy and giveaway licenses! We appreciate your support!

To enter the contest:

- Tweet this: “Win a copy of Kiwi on @macstoriesnet  http://mcstr.net/c0TTz5”