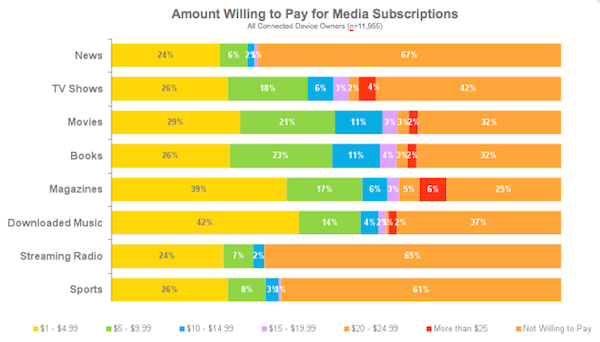 With rumors floating around about Apple’s upcoming cloud music service (especially after last night’s report on the company signing a deal with EMI) and others like Google and Amazon moving forward on the streaming bandwagon with products to upload and stream music at any time with smartphones, tablets and desktop web browsers, subscription-based payment systems are often seen as the only feasible solution to guarantee a continuos cloud service without interruptions, always available anywhere you go. Just like Spotify and Rdio let users stream large collections of music they don’t necessarily own by paying a monthly or annual fee, Apple is rumored to extend the iTunes subscription system it created for magazines to music, movies, and a combination of both for the ultimate iTunes Store cloud experience. But just how much are phone and tablet people willing to pay for these new cloud services based on subscriptions? That’s what research firm Nielsen takes a look at in its latest survey, asking users of “connected devices” how much they would pay for media subscriptions that would give them access to a variety of content on their mobile devices.

It turns out, music, movies, magazines, books and TV shows are something people would pay for – sure, there are different results, but take a look at the graph above and you’ll see that these 5 categories are the ones with less orange, which stands for “not willing to pay.” On the other side, sports content, streaming radio and news are something people would be less prone to subscribe to. Overall, the sweet spot for subscriptions seems to be around $4.99 - $9.99 per month, which is what most cloud services ask for these days. There’s an interesting difference about music, however: people would pay for “downloaded music”, and not for “streaming radio.” Assuming “downloaded music” stands for “music you own”, and people care about having online access to music that’s ultimately theirs, services like Amazon Cloud Player and Google Music Beta should be exactly what people are looking for, as they let you upload your own music to the cloud. Also assuming Apple is working on a similar solution, this survey suggests the company should allow for both uploads and Spotify-like streaming, enabling users to lock their own collections in the cloud, and get access to stuff they didn’t buy as well. Maybe that’s what these deals with music labels are all about.

Tablet and smartphone owners with proper Internet access on the go are willing to pay for online media available through apps, and if that’s their own media, there’s an incentive to subscribe. A report in the past weeks suggested Apple was considering offering a free initial trial for its new cloud music service, with a $20 yearly subscription once the demo is over.