Perhaps today’s most interesting announcements weren’t new iPads or Macs, but Apple’s range of software. It’s been a while since the iWork suite of apps have received updates on the desktop, and iLife apps such as iPhoto, iMovie, and GarageBand looked outdated as soon as iOS 7 arrived on iOS devices in September. You’re probably wonder what the skinny is around all the new apps and whether you qualify to get those apps for free. This won’t be an exhaustive overview, but ask and you shall receive. 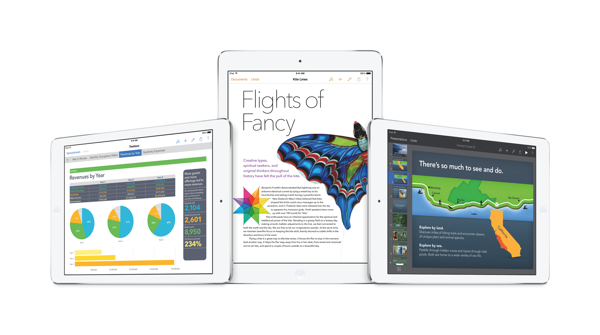 The heading gives you the short version of what’s happening with all of the iWork apps. Apple has updated both the iOS 7 and OS X versions of these apps, updating the look and feel for each respective platform. On iOS, you’ll get an experience consistent with previous versions of iWork while taking on the visual aesthetics of iOS 7. On OS X, updated icons deliver a pop of color while undergoing Safari-like improvements that streamline the experience. It’s all very impressive, but perhaps the biggest news doesn’t even revolve around either of these products. iWork is also now available on the web, and those apps are just like their desktop counterparts.

Remember, iWork consists of: Pages for research papers, flyers, and documents;  Numbers for spreadsheets, charts, and graphs; and Keynote for slideshows and presentations.

Pages gets a new toolbar on iOS 7 and a context aware formatting panel on the Mac. The toolbar, or formatting bar, is placed directly above the keyboard on iOS 7. It lets you access things font styles and text alignment without having to navigate through a popover. On the Mac, the previous info panel is no longer a floating palette, but an integrated sidebar that’s not terribly different from the ribbon in Microsoft Word. Depending on what you’re doing, such as writing text or working with images, the sidebar changes to reflect things you can do. As before, all of your documents sync between iCloud, ensuring that the latest changes to your documents are available across all of your devices.

Numbers gets interactive charts that can be updated in real time. What this means is that when you create a timeline of data, comparing various points of data becomes easy since you can interact with graphs in real time via a virtual slider. As with pages, the sidebar and toolbar have also been updated for OS X and iOS 7 respectively.

Keynote gets updated transitions that are more dynamic than before. Apple says they have 30 “cinema-quality” transitions lined up to make presentations pop, with physics based object animations creating a sense of fluid realism. New templates, animations, and transitions all add up to prettier presentations with improved interactivity on iOS 7 and OS X.

Most importantly, you can share documents with colleagues and they don’t even need an iCloud account or a Mac to work on a document with you in real time. This is Apple’s huge announcement, and it’s honestly a game changer for people looking to collaborate with others. If you share your file with someone else, they can edit that file using iCloud’s web interface on a Mac or PC. We talk about Apple not having their skin in the game when it comes to services, but this is a unique announcements, and the progress Apple has made emulating their desktop apps for the web cannot be ignored.

Just like the iWork apps, all of the iLife apps have received upgrades to take advantage of 64-bit processing with the A7 chip on iOS 7. iPhoto does away with a lot of the skeumorphism that was question in previous versions, as does iMovie and GarageBand. GarageBand retains some old visual qualities for effects pedals, but so do apps like Final Cut Pro X. Ultimately, these apps were redesigned and updated to deliver better performance and improve how interact with these apps.

iPhoto’s visual update is dramatic on iOS, minor on OS X. iPhoto is largely the same as before, with the addition of being able to create printed photo books from the iOS 7 version of the app. It’s an update that gets rid of the glass shelves on iOS and instead replaces them with what you really want to see: just your photos.

iMovie has a new theatre that displays all of your created works. Apple’s not only making editing tools easier, but through iCloud they’re now letting you keep your latest creations in sync between all of your Mac and iOS devices. All of your recorded and edited content will show up in a theater that’s viewable on any device, provided you have the bandwidth to upload those videos in the first place.

GarageBand is really the star of the show, with new interactive drum effects that play along to the music (with others unlockable via an in-app purchase). With GarageBand, Apple is widening the number of tracks from 6 to 8, and you’ll get up to 16 if you have a 64-bit capable device. They demo’d a drummer named Kyle who’s drumming could be tuned to sound just right for your song. Apple has other expressive personalities you can purchase if you’re looking for an additional band member to fill in the gaps on your tracks.

So how do you get it?

For Macs: If you purchased a new “qualifying Mac” on or after October 1st, 2013, you can get the iWork suite of apps for free from the Mac App Store. GarageBand is free provided you install OS X Mavericks. For iMovie and iPhoto, those apps will be updated for free if they came preinstalled on your Mac, even if it was purchased at an earlier date.

For iOS devices: iPhoto, iMovie, Pages, Numbers, and Keynote are free on the App Store for “qualifying devices” purchased and activated on or after September 1st, 2013. GarageBand is free if you have iOS 7 installed.

If you purchased iWork or iLife in a box (iWork or iLife ‘09): As Macworld reports, this isn’t the case as it’s a bug in Apple’s system. Customers who purchased iWork and iLife ‘09 and up on disc should be able to upgrade via the Purchased tab in the Mac App Store. Older versions of the software will require paid updates.

Have already purchased iWork and iLife apps: You’ll get free updates on iOS and Mac. No re-buying necessary! If they aren’t installed, search for them again in the App Store, or find them under the Purchased section in the Updates tab on iOS. They’ll be in the purchased tab in the Mac App Store on your Mac.

Pricing and links if you have to buy:

For more information, see the iLife and iWorks page on Apple.com.