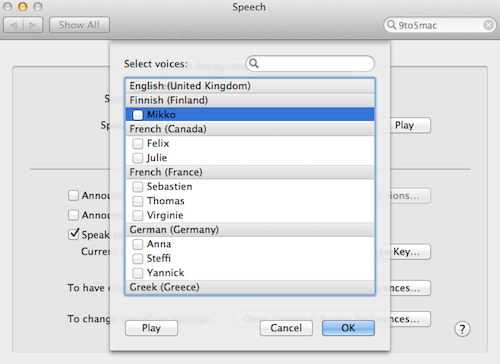 A number of reports from multiple sources over the past months pointed at Apple willing to ink a deal with speech recognition company Nuance over the implementation of text-to-speech and mobile speech recognition technologies in iOS devices, with a preview of the new functionalities scheduled for the WWDC, where the company is rumored to show off iOS 5 with deep Siri integration – Siri is a “personal assistant” app which used Nuance’s tech, among other things, that Apple bought last year. As noted by Netputing, however, it looks like the Apple / Nuance licensing deal might extend to a broader level, with voices from a Nuance product (Vocalizer, nèe RealSpeak) being embedded in Lion since Developer Preview 1. The voices were included in the first beta of Lion seeded to developers in February, but only last week the website noticed the names and settings in the Text Speech preference panel were strikingly similar to Nuance’s offerings.

The new voices in Lion still can’t be utilized as they return an error upon installation, but the samples can be demoed for free following the direct links below, courtesy of OS X Daily.

Mac OS X Lion is set to include a wide variety of new high quality text-to-speech voices in a multitude of languages, thanks to a long suspected partnership between Apple and Nuance, a speech technology company. The new voices are of surprisingly good quality and speak in major world languages including English, Mandarin, German, Japanese, French, Spanish, Thai, Bahasa, Portuguese, Hindi, Russian, and many more.

While the rumors indicated Apple was working closely with Nuance over speech implementation in iOS devices, Nuance might have licensed its full portfolio of international digital voices to Apple for usage in iOS 5 and Mac OS X Lion. A demo of these new features will likely happen at the WWDC, which is less than a month away. [via MacRumors]