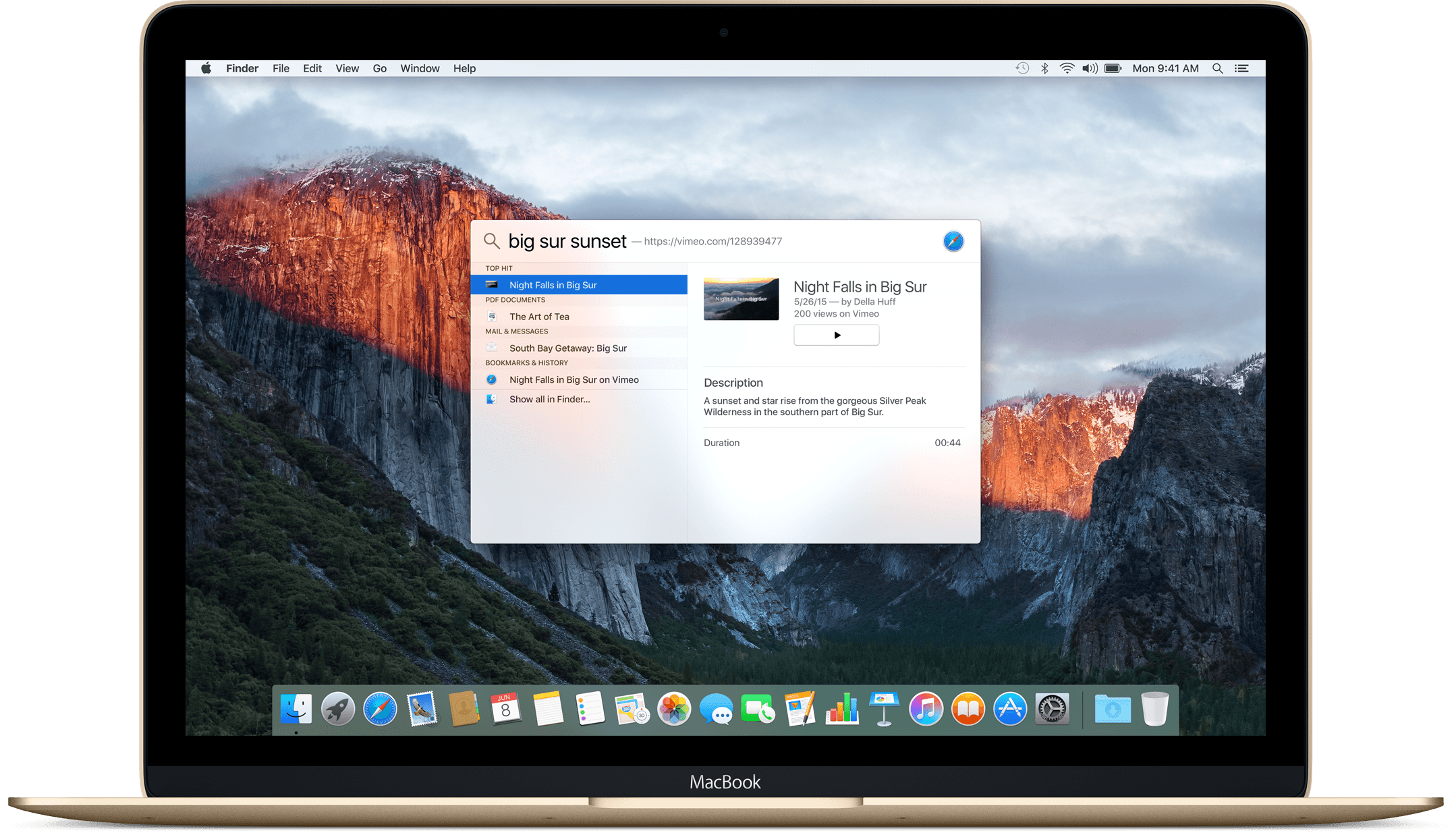 Spotlight search has greatly improved search functionality, making the feature smarter and more powerful by building in natural language processing and integrating it with more services. Now you can perform searches with phrases such as “big sur sunset,” and Spotlight will surface videos from the web that show the sunset in Big Sur. Spotlight has also gained some other nice touches such as the ability to resize or move the spotlight window around on your screen and integration with weather, stocks, sports, transit, and the aforementioned web video.

Many of Apple’s built-in apps have been updated with more powerful, natural language driven search similar to that of the new Spotlight. In Mail, for example, you can search for terms like “Mail I ignored from Phil,” and the app will surface any emails from people named Phil that you didn’t respond to. There’s also a variety of other nice new features such as new gestures to mark emails as unread or read, or throw them in the trash; multiple tabs when composing messages, meant to make responding to emails while in full screen mode easier; and the ability to hide an email you’re composing and then drag attachments from other emails into the new message, just by hovering over the minimized tab. Mostly small things, but all nice touches that will make the overall experience of using Apple’s Mail a bit easier.

The biggest change to Safari is the addition of pinned tabs. You can now take any tab that you access frequently and drag it to the far left side of the tab bar. The tab will minimize into just the favicon and be “pinned” to the side of your tab bar. Now any windows you open will have the pinned tabs present, and clicking them will open a new tab with the site in question loaded into it. Another change, which will definitely improve user experience for Apple TV owners, is that AirPlaying web video will now behave in the same way it does on iOS: web videos will get a dedicated AirPlay button so that only the video itself will be streamed to your Apple TV. No longer must you stream your whole screen when you only want to share a video in your browser. Finally, the updated Safari allows you to view which tabs are playing music or video, and mute them individually or all at once with one click.

The main change to Finder is the same improved search from Spotlight and Mail. Search for terms such as “Documents I worked on Last June,” and Finder will reveal any documents that were edited in the month of June last year.

The app with the most changes is Notes, which has received a variety of new features such as the ability to turn your typed lists into checklists, add photos and videos directly into your notes, and insert graphical links and map locations. All of these changes are coming to the iOS 9 version of the Notes app as well.

The big new addition to Maps is support for public transit. Maps supports complex trips, and can describe instructions to switch trains, get off and walk to bus stops, and even to take a ferry. As in the previous version, sending prepared directions to your iPhone is a few easy clicks. 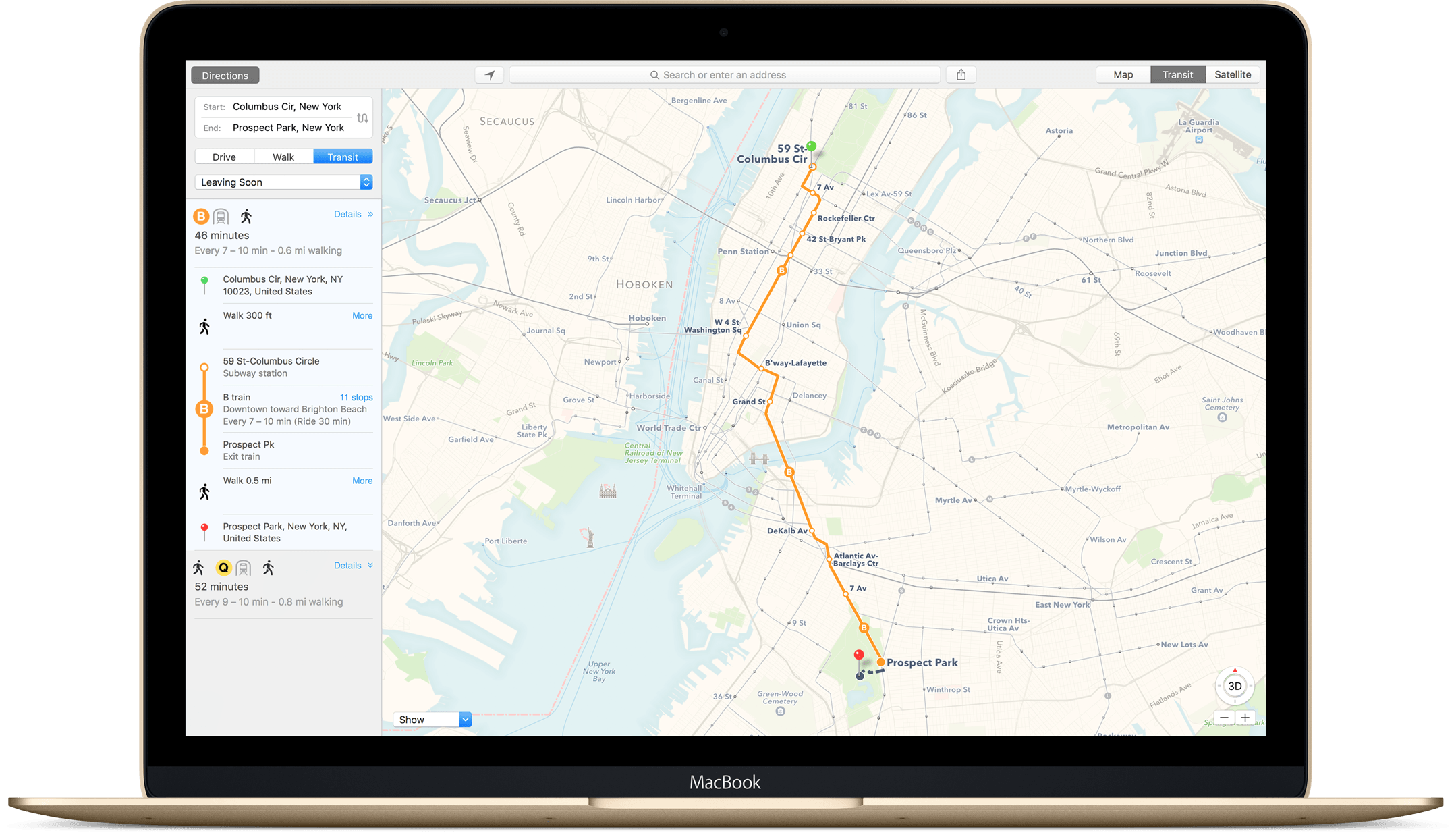 The Photos app has received a small update with two much needed, much asked for features: third party editing extensions, and the ability to add location data to photos.

Another random new feature is the ability to “shake” the mouse to make it grow. We’ve all had a time when we lose track of where exactly the mouse pointer is on our screen, and in OS X El Capitan we can now move our finger back and forth on the trackpad quickly and the mouse will grow a little bit on the screen as it shakes, then shrinking back to normal size after we have identified its position. It’s the little things. 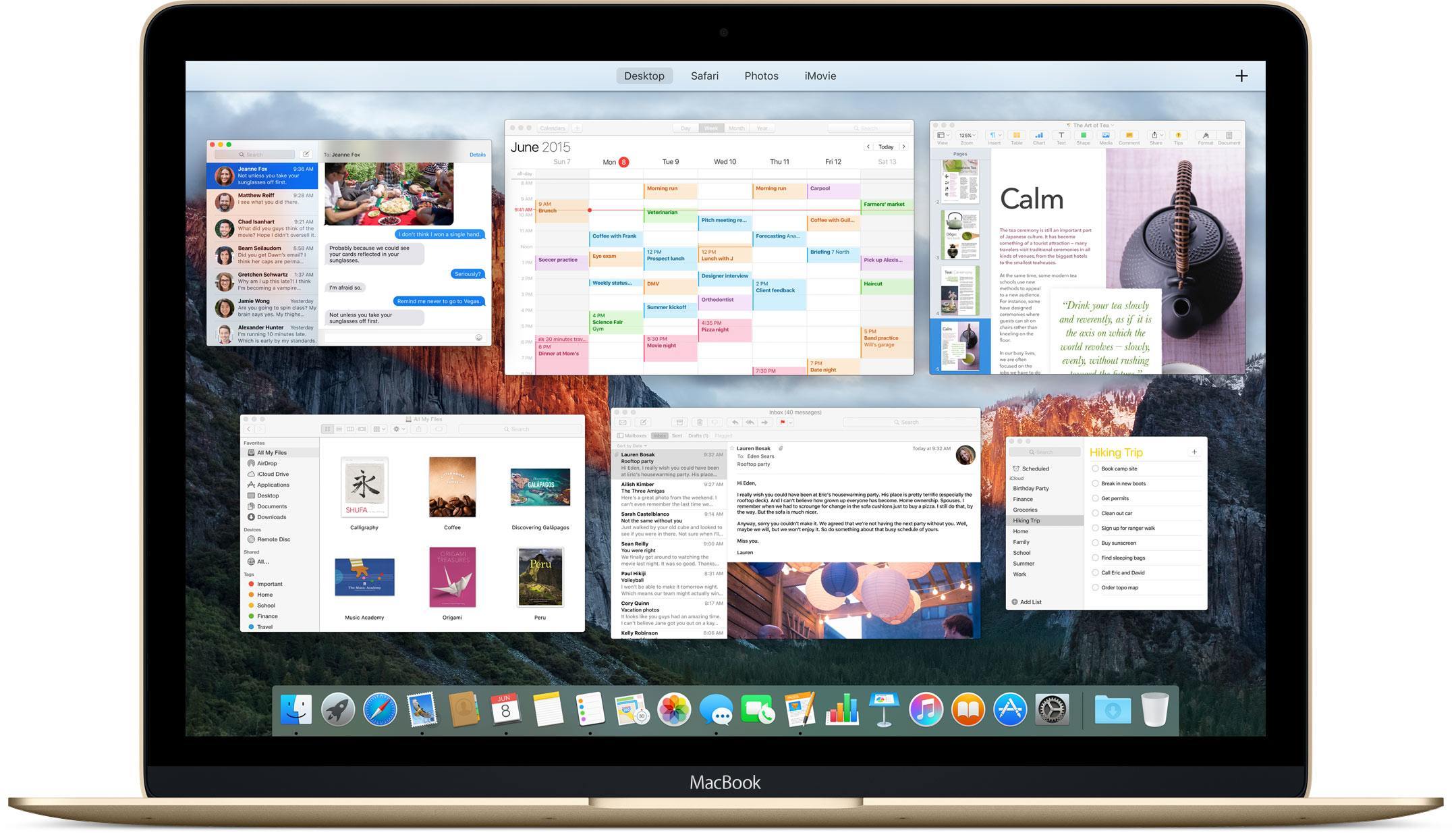 Some of the biggest changes to the OS X operating system come in the form of window management. Mission control has been reworked to be smoother, simpler, and faster than its previous iterations. Windows can be dragged to the upper edges to move them onto new Desktops, or they can be dragged into the space between the thumbnails of existing Desktops to transform the app to full screen. Finally, you can drag windows on top of other full screen apps to create a split screen view, new in El Capitan, which will pair two windows in “full screen mode” side by side. You can get this same effect by clicking and holding on the green “full screen” button in the title bar of any app, which will partially full screen the app and then let you choose from an exposé of your other apps to fill the second part of the screen. 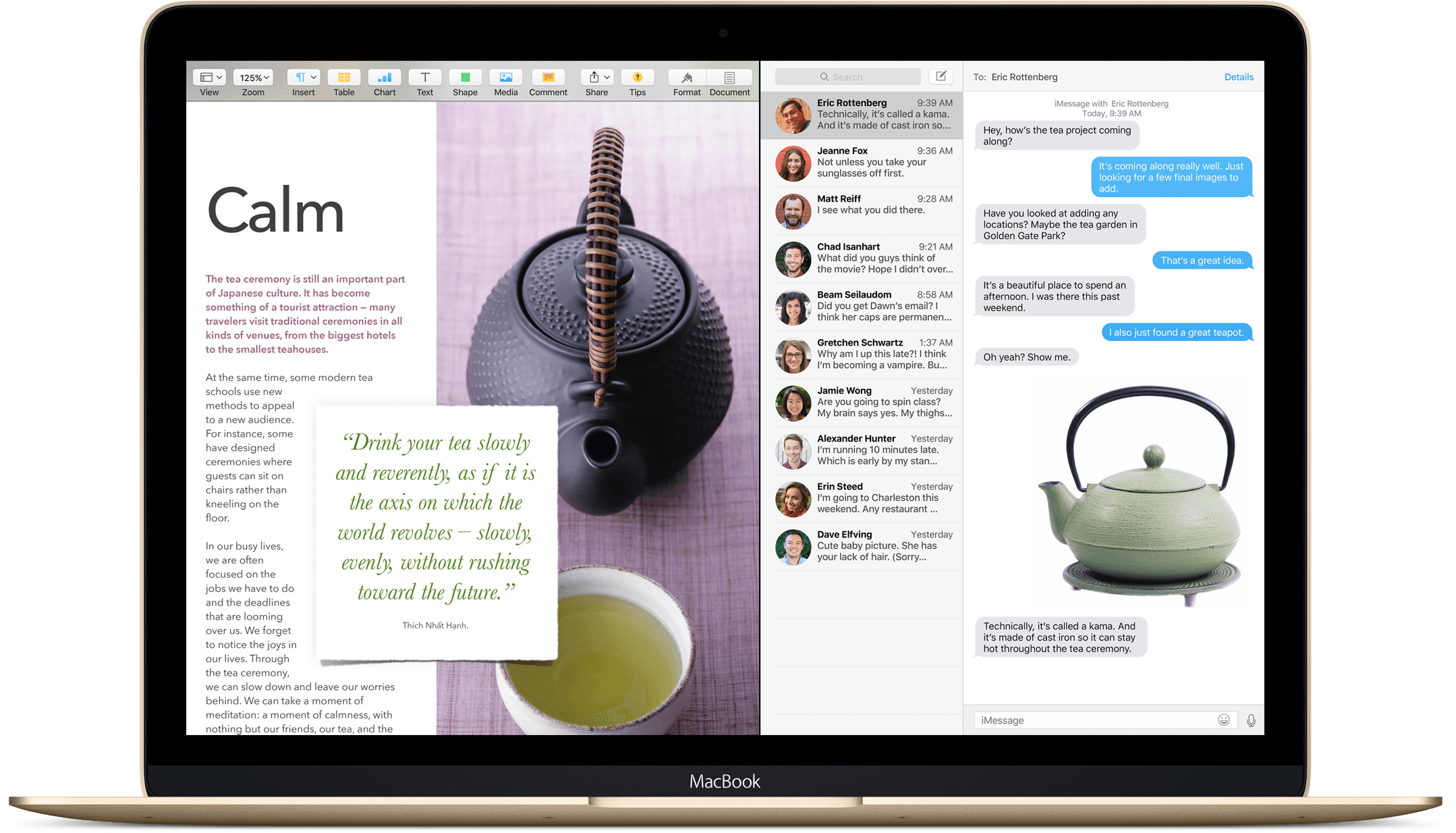 All of these upgrades are fairly small by themselves, but together they make for a new OS X that is taking care of many of the small annoyances, and improving how we work in new and interesting ways.

Most of this performance boosting comes from the addition of Metal to OS X. Metal was introduced on iOS last year as a way for game developers to get the most out of graphics performance on Apple’s A7 chip. For OS X, Metal reaches further than game development, allowing for the aforementioned boost in graphics performance all across the system. According to Apple, apps that use Metal will get 40% greater rendering efficiency. When it is used for games, Metal can deliver up to a 10x improvement in drawing performance.

Last year, OS X Yosemite brought a huge visual update, as well as a host of powerful integrations between Apple’s two main operating systems, OS X and iOS. This year’s OS X El Capitan update is a little less ambitious, dialing back the headline-making new features and changes in favor of under the hood boosts to performance, and lots of small tweaks and additions to improve the overall experience of using OS X. New window management workflows will make working with multiple apps at once a better experience, and more powerful Spotlight search will improve the speed and ease of finding files within the labyrinth that is most Mac users’ file systems, and make accessing information such as weather, stocks, and web video much more effortless as well.

A developer preview of El Capitan is available today on Apple’s Developer Portal, and a public beta will be available starting in July. The operating system will officially be released to the public this fall.