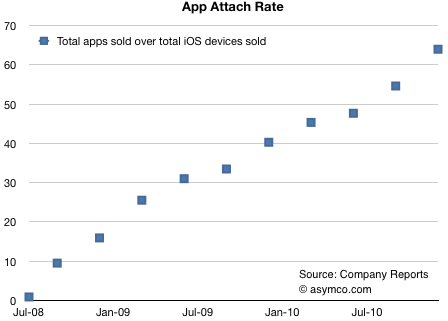 Research firm Asymco by industry analyst Horace Dediu has published a new report that details the average number of apps that have been downloaded on every iOS device. The devices included in Asymco’s report are the iPhone, iPod touch and iPad – but not the Apple TV, which even if it’s an iOS device it hasn’t got access to the App Store yet.

Asymco noticed that app downloads have been growing at a faster rate than song downloads from the iTunes Store in the past three years. The iTunes Music Store was launched in 2003, while the App Store went live in Summer 2008. Apple has recently announced that the App Store is nearing 10 billion downloads. Dediu predicts that apps will overtake songs downloaded from the iTunes Store within March 2011; he made a similar prediction in September claiming that apps would surpass songs by the end of 2010 – that didn’t happen, but the numbers are close. It’s also worth mentioning that Apple doesn’t provide official numbers and stats very often, so this is all based on market research and (very) accurate guesses. Apps, however, reached 10 billion downloads in less than half the time it took for the iTunes Store.

The amazing story of this chart is not that apps are running at above 30 million download per day, but that the figure is growing. Growth like this is hard to get one’s mind around. Not only are downloads increasing, but the rate of increase is increasing.

There is one final piece to put in place on this puzzle. Some might argue that the reason these download rates are increasing is because the installed base of devices is increasing at the same rate. In other words, app consumption could be steady on a per user basis.

By dividing the cumulative apps downloaded by the cumulative devices sold, Asymco noted each iOS device has downloaded 60 apps on average. In 2008, the apps were 10. At the end of his report, Dediu also concludes app consumption is increasing at a rate that will soon overtake PC software. It will be interesting to see whether or not the Mac App Store, an App Store for PC software, will somehow change the situation illustrated by Dediu.