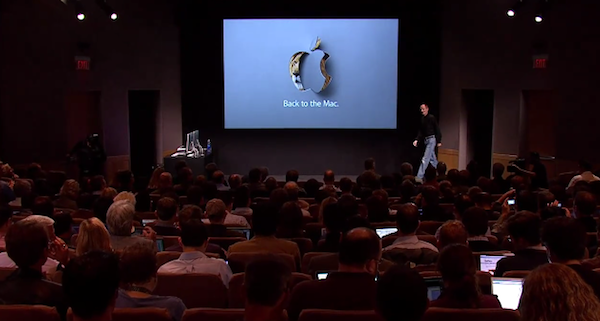 Apple’s Town Hall Auditorium during the Back to the Mac event, October 2010

John Paczkowski at AllThingsD follows-up on his earlier report of Apple’s next media event scheduled for October 4th, claiming that the keynote will be held on Apple Campus in Cupertino, rather than the Yerba Buena Center for the Arts, as usual with Apple’s fall event. Details aren’t clear, but it’s possible Apple didn’t want to book a full date for the Yerba Buena Center as the keynote was too much of a “moving target”.

Perhaps, the company felt a more intimate venue was best for newly installed CEO Tim Cook’s first media event. Perhaps YBCA was simply already booked. Whatever the reason, the world will get it’s first look at the next iPhone at Apple’s Town Hall Auditorium in early October.

Apple’s Town Hall Auditorium has been used on several occasions to preview upcoming versions of iOS to the press. Last October, Apple held its “Back to the Mac” media event at Town Hall to preview the new version of OS X, Lion, iLife ‘11 and announce updated MacBook Air models.

Rumors surrounding Apple’s next iPhone model have claimed the company has been working on either a completely redesigned device, or a minor update unofficially dubbed “iPhone 4S”. Several sources previously reported the next iPhone would ship in mid-October on AT&T, Verizon and Sprint in the United States; it is widely believed the new device will come with Apple’s upcoming iOS update, iOS 5, pre-installed and ready to be configured with iCloud. AllThingsD also reports Apple’s new CEO, Tim Cook, will preside over the event.