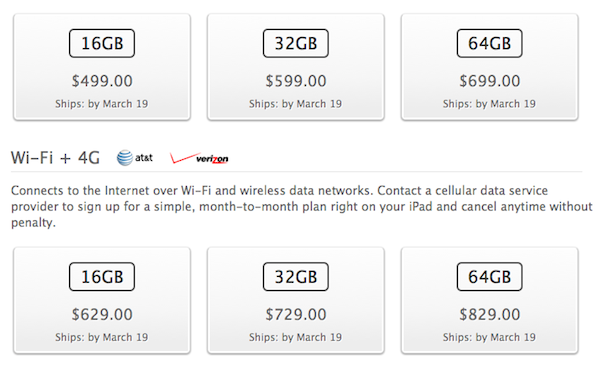 Update 3/10: Apple has confirmed in a statement to CNET that initial iPad units available for pre-order are sold out.

Customer response to the new iPad has been off the charts and the quantity available for pre-order has been purchased,” an Apple representative told CNET. “Customers can continue to order online and receive an estimated delivery date. Beginning Friday, March 16, the new iPad will be available for purchase at Apple’s retail stores and select Apple Authorized Resellers on a first come, first-served basis.

As noted by Matthew Panzarino at The Next Web, shipping times for the recently announced new iPad have slipped to 2-3 weeks in several online stores worldwide. The new device, announced at a media event on Wednesday, was made available through online pre-orders immediately after the event; in the hours following the refresh of the Apple online store with new products, the company had to face technical problems with the site not loading correctly due to heavy traffic. That hasn’t stopped customers, however, from sending their orders for the new iPad, whose initial shipments are now sold out in many international versions of the store – shipping times of 2-3 weeks are now reported in the UK, Germany, Japan, France, and Australia. Curiously enough, at the moment of writing this US shipping times had slipped to 2-3 weeks as well, only to go back to March 19 right before publishing.

Other stores of the initial launch countries are now reporting delays as well: in Canada, new iPad orders will be shipped on March 19, in Singapore and Australia on March 22.

On March 16th, the new iPad will go on sale in:

25 more countries will follow one week later on March 23rd:

You can read more about the new iPad, which carries a Retina display, LTE, Bluetooth 4.0 and quad-core GPU, in our overview.