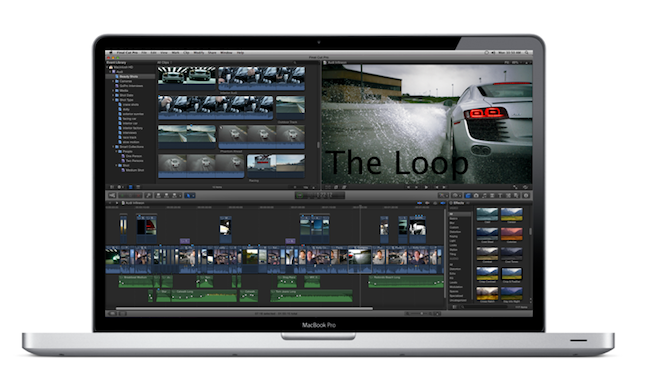 Last night, Apple officially announced a new version of Final Cut Pro during the Supermeet in Las Vegas, Nevada. As you might have read in our liveblog and announcement post, Final Cut Pro X has been completely rebuilt from the ground up to be as revolutionary as the first version of FCP released in 1999: full Cocoa, Core Animation, Grand Central Dispatch and 64-bit support, iMovie-inspired menus for easier navigation and media management, a whole new underlying engine that – according to people who saw the demo yesterday – makes the timeline incredibly fast and responsive. With keyboard-based nesting, magnetic timeline, background processing and automatic people and media detection on import, Apple aims at revolutionizing Final Cut Pro.

As announced yesterday by Chief Architect of Video Applications Randy Ubillos on stage, Final Cut Pro X will be released at $299 in June. Final Cut Pro went under a major price cut (it used to be sold at $999), and it will also be available on the Mac App Store – like every new Apple desktop app nowadays. But last night, many immediately wondered whether the lower price and Mac App Store distribution would lead to the demise of Final Cut Express (widely regarded as an “iMovie for Pros”, lacking many of the functionalities of Final Cut Pro) and boxed copies of FCP. Furthermore, Apple made no mention of all the other Final Cut Studio apps last night such as Motion, Soundtrack Pro, Compressor, Color and DVD Studio Pro. On Twitter, I speculated Apple could release them as standalone apps in the Mac App Store or – when they don’t make sense as apps because they’re basically “extensions” to Final Cut – as in-app purchases within Final Cut Pro X itself.

An Apple representative, speaking to The Loop, seems to confirm the theory that other apps will be released alongside FCP X:

Apple on Wednesday introduced Final Cut Pro X, but there was no mention of the other applications in the suite of video apps.

The Loop has also received a series of high-res screenshots, one of them you can see above. We should know more about Final Cut Pro X in the coming weeks (Apple hasn’t posted a press release, or updated its website with a sneak peek) as Apple gets ready for a June launch, presumably during or soon after the WWDC.