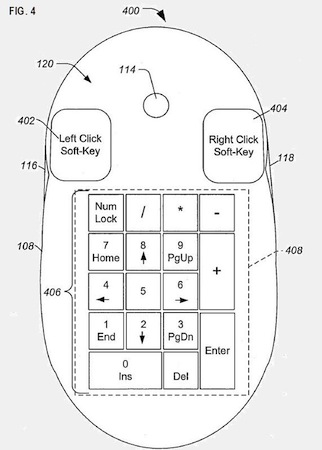 A new day, new Apple patents surface on the Internet. Unlike most days when we get to know the latest inventions the teams at Cupertino have been awarded, today’s design embodiments and ideas are fairly interesting and not so much projected in the future like a touch-based iMac could be. As reported by Patently Apple, a new patent shows two new possible touch input systems that might soon replace our usual mice and physical keyboards.

The patent applications reveal a mouse equipped with a multitouch display capable of visualizing information and virtual keys such as a numeric pad on the device’s surface. The mouse would still come with standard features like soft left / right buttons, but in the middle there would be place for a display carrying an additional interface for users.

Although a wide variety of applications are possible, as just a few examples, the displayed image data might include one or more of text, input locations such as virtual buttons, still or video images, and colored light that is either static or changing. As an example, soft-key information, such as text labels, could be displayed, for example, adjacent to left and right touch sensitive regions 116 and 118 to provide labels indicating functionality available by selection through such regions.

The report goes really in depth illustrating how a display-enabled mouse would be capable of providing a second layer of touch interaction between a user’s hand and the computer. Another touch-related patent application, also uncovered by Patently Apple, details a virtual keyboard for the iMac with haptic feedback for each key:

Put simply, Apple is playing around with the idea of a virtual keyboard users could install on any machine, with the possibility of re-arranging any key on the virtual keyboard and configure any kind of language profile. Each virtual key would also come with a dedicated haptic motor to give feedback on pressing and releasing.

The third report details an evolution for the iTunes DJ and visualizer functionalities that will allow iPods and iPhones to change their behavior according to different environments and user’s physical conditions. Such a feature requires a heart rate, breath or blood sensor to be installed on a mobile device. Ok, this one sounds a bit like the future to us, too.

iPhones with cardiac sensors built-in appeared in Apple patents before.