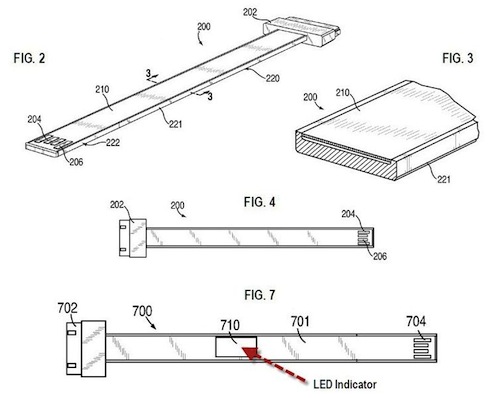 Of all the designs and inventions Apple patents and trademarks every week, some are really interesting and provide good indication of things to come in Macs and iOS devices. Whilst we’ve recently seen several complex patents detailing social functionalities and smart location features coming to iOS, image editing capabilities for iPhones and a “safe deposit box” for cloud storage, a new patent design uncovered by Patently Apple last week seems to provide a simple solution to a minor, yet annoying problem: cables.

Apple sells a variety of cables on its online store: these cables are usually meant to connect Mac computers to external peripherals like monitors and hard drives, or to devices like iPhones and iPads. From HDMI connectors and FireWire 400 or 800 cables to most standard USB ones and 30-pin dock connectors (the ones that also come bundled with a new iOS device), these cables have one thing in common: they’re not flat. They tangle, they’re difficult to put away and carry around, they’ll very likely break over time as you twist them and, overall, simply use them. This happens because the standard cable circuitry used in the tech industry includes one or more wires placed within a non-conductive enclosure that result in a circular connector – the cable. The problem with a circular cable is that sometimes it’s meant to be used in a specific orientation, and if the cable bends in the opposite way (example: when you tangle it to put it away) the internal wires or external enclosure could break.

Apple’s patented solution addresses the issue with flat USB and FireWire cables that use a “flexible circuit” to prevent internal wires from breaking over time.

Instead of using wires, a cable can be constructed using a flex as the conductive material between the connectors. Such a flattened or ribbon-like cable could be less prone to tangle, could roll more easily for storage, and can provide controlled bending in two directions (e.g., as opposed to unhindered bending in all directions).

If you’ve ever used flat cables, you know how much comfortable and resistant they feel, as opposite to standard circular cables. I own several flat audio jack and Ethernet cables and I can say they’re incredibly better to carry around and untangle than common USB or FireWire cables. But Apple’s patent doesn’t stop at redesigning the enclosure and internal structure: it appears that the engineers at Cupertino are also studying a way to embed LED indicators into the flat cable to convey information such as successful connections, or data transfers:

Apple states that circuitry 710, related to patent FIG. 7 above, could perform any suitable operation for the cable including for example detecting and controlling power usage (e.g., block power surges or shorts), encrypt or decrypt transmitted signals, multiplex received signals for a single channel (e.g., when providing signals between a connector having few pins and a connector having a larger number of pins), repeat received signals for transmission over larger distances, provide an indication of signal transfers to a user (e.g., via a LED), indicate whether a cable could be safely disconnected (e.g., using one or more LEDs), or combinations of these.

A cable redesign might sound like a solution to a problem that’s a simple annoyance, but I believe it’s in Apple’s philosophy to make a better user experience starting from the smallest details. Flat USB, FireWire and, perhaps, Thunderbolt cables with embedded LED indicators are those details I’d expect from a company like Apple in a couple of years. [via iSpazio]