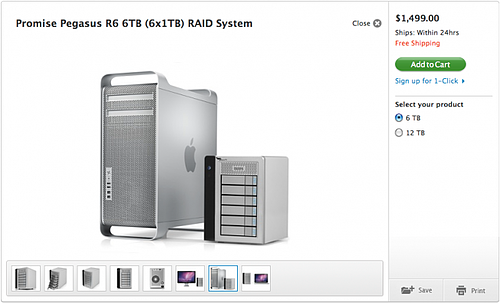 MIC Gadget has an interesting article today that has some details of what could be an imminent Mac Pro update. You may recall that a few weeks ago, Cnet’s Brian Tong tweeted that an updated Mac Pro and Mac Mini would come out in August. Most interestingly, MIC Gadget managed to take a screenshot of the Apple Store a few days ago when the Promise Thunderbolt RAID system went on sale. Curiously, in one of the promo images, it was shown beside a Mac Pro. This is despite the device being a Thunderbolt-only device, which the Mac Pro does not currently support.

The image was subsequently pulled and whilst it could just have been an error by the graphics department, it does fit in line with the suggestion that Thunderbolt capability is slowly being rolled out onto every Mac with every hardware refresh. The MacBook Pro refresh earlier this year started the trend, followed by the iMac refresh and recent rumors are suggesting that the MacBook Air refresh will similarly get Thunderbolt capability. The image also suggests that the current design of the Mac Pro will go unchanged from what it currently looks like.

In a similar vein, Intel’s Sandy Bridge hardware has also been making its way across the Mac refreshes and MIC Gadget believes this trend will continue with a Mac Pro refresh. They are claiming that the Mac Pro will feature an 8 core CPU that will be ‘exclusive’ to Apple for a few months before other PC manufacturers can have access to it in Q4 of this year. They note that this isn’t particularly new, with Intel previously working with Apple on the first MacBook Air which received similar treatment.

Our sources indicate Apple is making headway with access to this technology, and they are investing heavily into the Mac Pro. Sandy Bridge will be integrated with the new Mac Pro CPU as well, but issues remain with the heat being produced by such powerful CPUs.