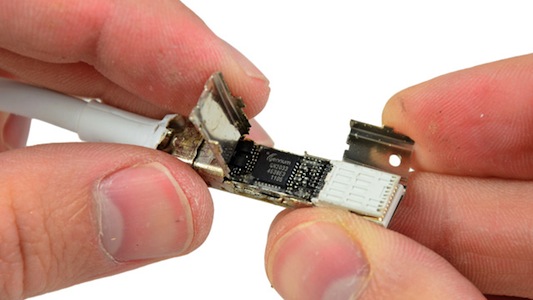 Apple eventually started selling Thunderbolt cables and peripherals on Tuesday but many have asked why the Apple Thunderbolt cable costs, the rather expensive, $50. Ars Technica and iFixit decided to dig into the cable to find a bit more about it and discover why exactly it is so expensive.

First contacting a support technician, they were told that the Thunderbolt cable was “smart”, containing firmware inside it. Subsequently reaching out to Intel, they wouldn’t discuss anything regarding “firmware in the cable” but they did note that any Thunderbolt peripheral or device will require a specific Thunderbolt cable.

Only Thunderbolt cables can be used to connect Thunderbolt products using Thunderbolt connectors, the cables have been designed for the 10Gbps signalling as well as power delivery that are part of Thunderbolt technology.

Digging a little deeper however, Ars found this EETimes article, which noted that Thunderbolt cables use ‘active cabling’ and have different electrical characteristics from Mini DisplayPort to achieve full duplex 10Gbps transmission. Such ‘active cabling’ cables contain “tiny chips at either end that are calibrated to the attenuation and dispersion properties of the wire between them”.

iFixit decided to tear open the new cable and found that it contains two Gennum GN2033 Thunderbolt Transceiver chips which are described by the company as follows: