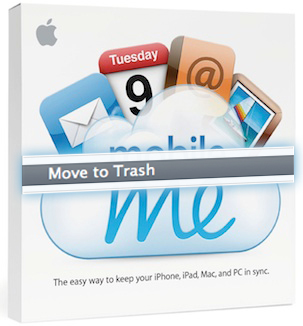 Back on February 7, we posted that an Apple initiative was to eliminate their retail box inventory. Today, Apple is notifying resellers that the company is discontinuing the retail box version of MobileMe, moving completely toward digital sales. Existing stock will continue to be sold while supplies last. MobileMe has also been removed from the ‘Configure’ page options when you buy a new Mac.

If you didn’t already know, boxed versions of MobileMe only have an activation code (no DVD) and Apple’s famous promo materials. The main reason they offer a retail box is to have a physical MobileMe product in-store for visibility (and the artwork on the box isn’t too shabby either).

Back in December we posted that Steve Jobs said that MobileMe will get “a lot better” in 2011; meaning they could be working on rebuilding its service. One option could be a offering a free version that could provide “digital lockers” for storing music, photos, and videos. Discontinuing MobileMe product boxes could also be a way for Apple to sell existing products and a brief period of digital-only sales before transitioning to a free service.

During yesterday’s annual shareholders meeting, Apple revealed that iTunes and MobileMe services are ready for takeoff in Apple’s North Carolina data center. Apple could be utilizing their half million square foot facility to support a growing number of users on MobileMe, for iTunes cloud services, or both. Apple has all but confirmed their data center could very well be the backbone for Apple’s most notable digital programs.

So what do you guys think? Getting rid of packaging is a great way to be more green, save money and promote the Mac App Store with exclusively selling their products. Would more people buy a MobileMe subscription if all this were to happen or would you stick with only a free account?