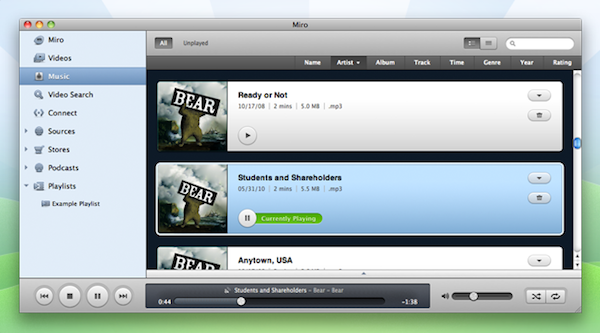 Miro, the open source media player and organiser, was today updated to version 4 and it heralds in some significant improvements and feature additions. Most notably it has taken on the role of being iTunes for Android devices, challenging others such as DoubleTwist with its media syncing capabilities.

It allows Android users sync the typical music, movies and podcasts but will even allow them to download Android apps from either the Google Android Market or from Amazon’s Android app store. The other significant addition is a home sharing feature for content stored in Miro. Using the iTunes DAAP protocol, it lets users stream their Miro Library to any other DAAP or vice versa, letting you play content from other DAAP clients, even a NAS drive on your network.

The New York Times is also reporting that the Miro developers, the non-profit group The Participatory Culture Foundation, have also been hard at work developing a Miro app for the iPad, which will launch within three weeks. The app will likely support the streaming features introduced in Miro 4.0 as well as focusing on podcasts, which was the original appeal for Miro.

[Via The New York Times]