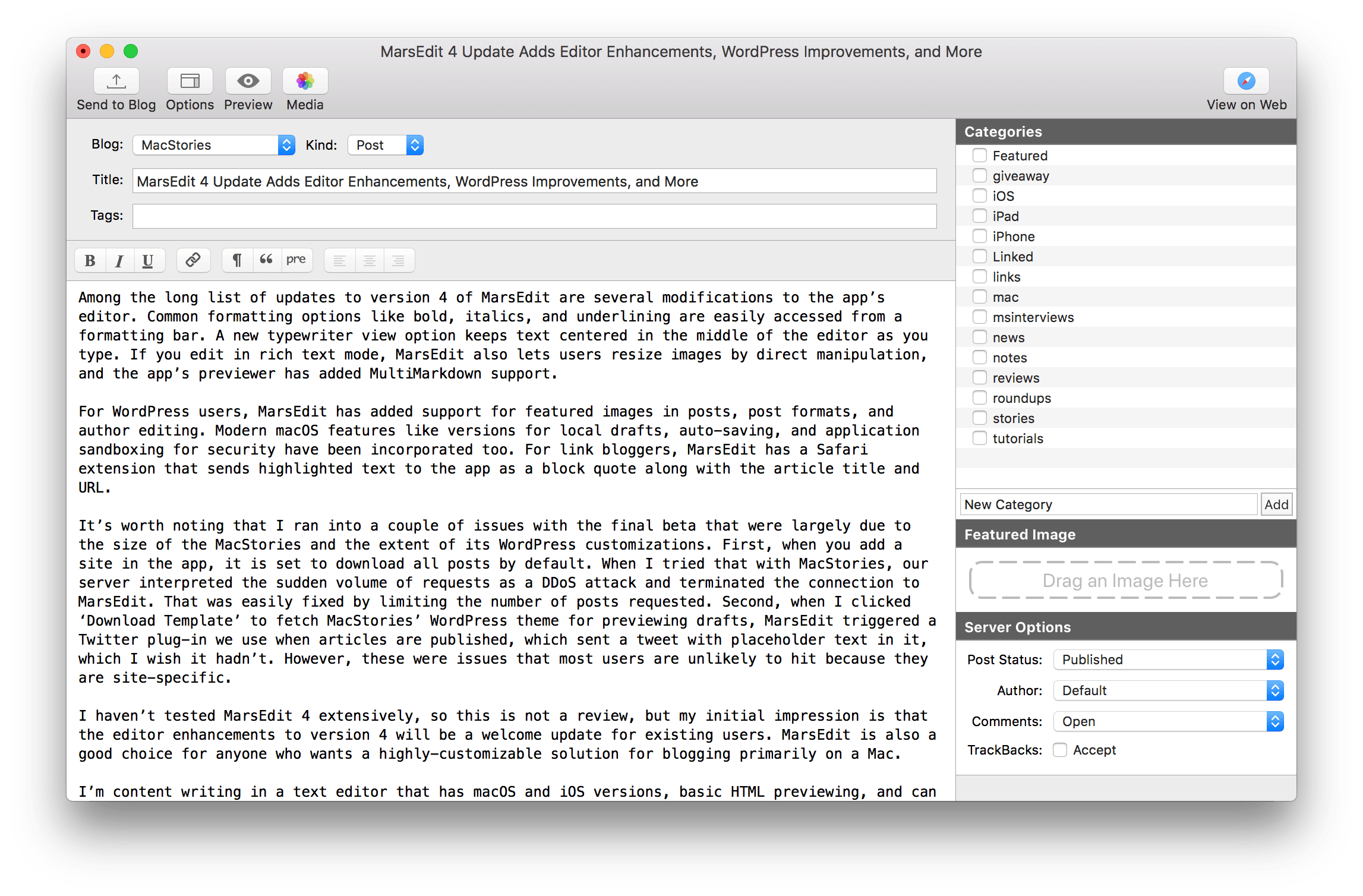 Among the long list of updates to version 4 of MarsEdit are several modifications to the app’s editor. Common formatting options like bold, italics, and underlining are easily accessed from a formatting bar. A new typewriter view option keeps text centered in the middle of the editor as you type. If you edit in rich text mode, MarsEdit also lets users resize images by direct manipulation, and the app’s previewer has added MultiMarkdown support.

For WordPress users, MarsEdit has added support for featured images in posts, post formats, and author editing. Modern macOS features like versions for local drafts, auto-saving, and application sandboxing for security have been incorporated too. For link bloggers, MarsEdit has a Safari extension that sends highlighted text to the app as a block quote along with the article title and URL.

It’s worth noting that I ran into a couple of issues with the final beta that were largely due to the size of the MacStories and the extent of its WordPress customizations. First, when you add a site in the app, it is set to download all posts by default. When I tried that with MacStories, our server interpreted the sudden volume of requests as a security threat and terminated the connection to MarsEdit. That was easily fixed by limiting the number of posts requested. Second, when I clicked ‘Download Template’ to fetch MacStories’ WordPress theme for previewing drafts, MarsEdit triggered a Twitter plug-in we use when articles are published, which sent a tweet with placeholder text in it, which I wish it hadn’t. However, these were issues that most users are unlikely to hit because they are site-specific.

I haven’t tested MarsEdit 4 extensively, so this is not a review, but my initial impression is that the editor enhancements to version 4 will be a welcome update for existing users. MarsEdit is also a good choice for anyone who wants a highly-customizable solution for blogging primarily on a Mac.

I’m content writing in a text editor that has macOS and iOS versions, basic HTML previewing, and can send articles to the WordPress web app when I’m ready to publish. It’s a simple setup, but it works well with MacStories’ WordPress configuration. It does mean, however, that after final tweaks in the web app, my published articles are not always the same as what’s in my text editor, which would not be the case with MarsEdit.

MarsEdit is available as a free download from the Mac App Store and directly from Red Sweater Software. An In-App Purchase unlocks publishing articles after a 14-day free trial. The full license for the upgraded app is free for anyone who purchased MarsEdit since June 1, 2017. Customers who purchased the app earlier will receive a discount.