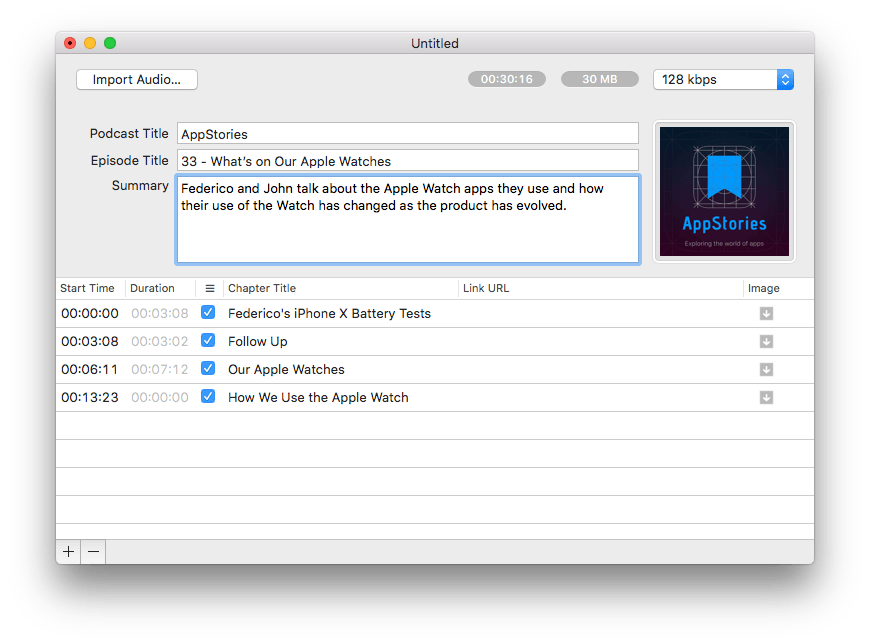 Marco Arment, the creator of the Overcast podcast player, has released a public beta of a tool for podcast producers called Forecast. The macOS utility handles encoding of podcasts as MP3 audio files and embedding of chapter markers and other metadata.

The final steps of putting together a podcast episode are tedious. Encoding can take a long time for longer shows and then, artwork, a title, description, and chapter markers have to be embedded. There are other little annoyances like manually entering an episode’s duration and file size into a show’s CMS too.

To speed the process up, Forecast uses a custom integration of the LAME MP3 encoder that spreads the encoding work across all of a Mac’s CPU cores, reducing encoding times substantially. Chapter markers are automatically generated in Forecast if created as markers in an audio editing app like Logic and exported as a WAV file. Forecast will even autofill artwork and other information if audio files are named consistently. There are also quick-copy shortcuts for grabbing an episode’s duration and file size.

Forecast is a beta, which comes with the usual caveats, but there is comfort in knowing that it has already been used in production by Arment and other podcasters for two years. I began using Forecast about a month ago as part of the AppStories production workflow, and it’s been stable and a big time saver.

Perhaps best of all, Forecast is free. Arment only requests that users that find Forecast useful consider mentioning Overcast on their podcasts or buying an ad for their podcast.

The Forecast public beta is available on Overcast.fm.