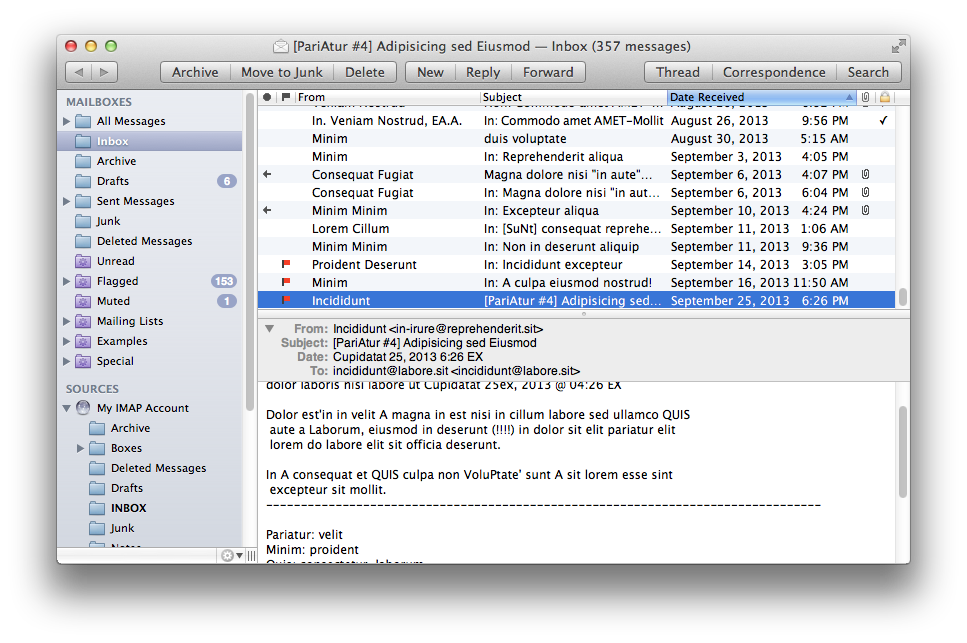 MailMate is a third-party email client for OS X developed by Benny Kjær Nielsen. The app was initially released in 2011 and it’s been actively developed for two years. Here’s a summary of the app’s features from the developer’s website:

Today, Benny launched a crowdfunding campaign for MailMate 2.0. From his blog post:

The goal is now to fund the time needed to finish version 2.0 of MailMate. This requires a minimum of 6 months of 2014 and therefore I’ve set the initial fixed goal to $25,000. A fixed goal means that I get nothing if the goal is not reached. Anything beyond $25,000 increases the period I am guaranteed to work full time on MailMate. The exact period depends on daily sales, but a rough estimate is an additional month for every $5,000.

And from the campaign page:

I’m an academic by heart and to me MailMate is a never ending research project filled with challenging problems. To you I hope MailMate is one hell of a powerful email client — an email client worth paying for. I don’t ever expect MailMate to become a golden egg, but I have reached a point where MailMate has to put food on the table.

MailMate is a one-man business. I take care of development, support, homepage, marketing, sales, and now, crowd funding. It’s as personal a business as it can be. Supporting MailMate is to support me and my family. If you want to then you can read a bit more about me and the background for this crowd funding campaign.

Two weeks ago, I decided to start moving away from Gmail/Google Apps and go back to old-fashioned IMAP with Exchange support for iOS devices. I wanted to regain control of my email, and the fact that Mavericks’ Mail had serious issues with Gmail wasn’t helping. So I backed everything up, settled with Rackspace Email, and downloaded MailMate. I’ve been using MailMate intensively for the past week and I’m excited for the app’s future.

First off, unlike Apple Mail, MailMate had no trouble moving thousand of messages (MacStories’ email from 2009 to today) around mailboxes. With my messages copied and stored on my new IMAP server, I started appreciating the good things about MailMate:

I’m still digging into MailMate’s feature set, but I can say that I haven’t opened Mail.app in a week and I like MailMate’s power-user features a lot. It’s not the prettiest app in the world and it lacks some useful Mail features, but it’s efficient, reliable, and nerdy.

So that’s where the crowdfunding campaign comes in. Benny has publicly shared his roadmap for MailMate 2.0, which includes a “beautifying” the app and the addition of several features like conversation views and rules. A feature that will come with version 2.0 – bundles – is already available today to users of MailMate 1.7.1 by checking an option in the app’s Preferences: once enabled, you’ll gain a menu to instantly send a message to OmniFocus or Reminders with a link included in the todo to re-open the message later on. If you’re familiar with Dispatch for iOS, the feature is very similar and shows great potential – here’s how Benny describes it:

A bundle can be a set of commands, smart mailboxes, various settings, and anything else which forms a natural group of functionality, for example, anything related to a particular type of emails, a particular application, or some company/organization.

These are just simple examples. The underlying system is extremely flexible and makes it easy for power users to add functionality to MailMate — functionality which can then easily be shared with other MailMate users.

Making email clients is hard, time-consuming, and expensive. Apple’s Mail app hasn’t brought many additions for power users in the past few years, prioritizing consistency with its iOS counterparts over features like keyboard shortcuts, filters, and AppleScript. While that’s reasonable for Apple, there’s a subset of users who would like to see more productivity-driven enhancements in their email client, and I think that MailMate already makes for a great replacement to Mail.app.

To help funding version 2.0 of MailMate, you can check out the official campaign at Indiegogo.