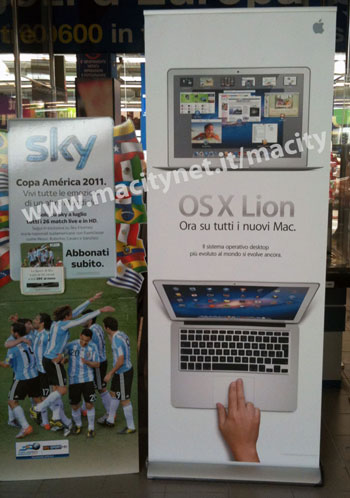 As reported by Italian website Macity [a Google translation is not possible as Macity seems to have pulled the article before we could generate a link, Google cache here] the first promotional material for OS X Lion has been set up in advance at Italian retail chain Euronics in Taranto, at the Mongolfiera shopping mall. Whilst recent rumors have pegged the new OS for a Wednesday launch (tomorrow), Apple hasn’t confirmed any official release date, nor did they authorize retailers to showcase signage ahead of the much anticipated launch. It appears, as Macity reports, that employees at Euronics wrongly set up the signage before the rumored launch date, as machines spotted in the electronics section of the shopping mall haven’t even been correctly updated for Lion (they’re still running OS X 10.6.6, whilst 10.6.8 is a requirement to update to the new OS).

The signage touts Lion’s biggest new features such as multi-touch gestures, Launchpad and Mission Control. The banners say “Now on every new Mac”, reinforcing speculation that new computers will be released shortly after the new OS, running Lion by default as a rumor previously claimed. The banners also encourage users to try out Lion, heavily promoting with photos the various multitasking gestures enabled in the OS.

According to recent reports, Apple has shipped hard drives containing Lion to retail stores so that employees can install the OS on store floor machines. Others also report “overnights” are planned later today to train retail staff on Lion, and change in-store promotional material for the (alleged) launch tomorrow morning. New MacBook Airs (as well as new Thunderbolt-equipped Cinema Displays) are expected to launch alongside Lion as well.