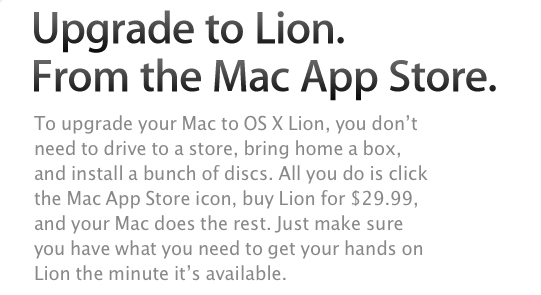 Following a report from earlier this week that suggested it could be possible to burn OS X Lion to a DVD and install it from a Mac’s disc drive, a new video surfaced on YouTube shows that, by grabbing the .DMG  file inside the OS X Lion Installer app from the Mac App Store, users could be able to boot OS X Lion off an SD Card and choose from a new set of options after the system restarts. The new Mac OS X Utilities window, which appears at the end of the video, contains options to fire up Disk Utility to repair and erase partitions, possibility to restore from a Time Machine backup (Time Machine has been improved in Lion) and a standard “Reinstall” action to perform a Lion installation. The window also shows a link to “get online support” by browsing Apple’s online documentation.

Nature’s Eye Studios writes in an email to us:

Enabling Lion on an SD card was actually verry easy, easier than I expect it to be…

After downloading Lion from the Apple Developer site, you get a 4 GB DMG file, so the next step was to open up Disk Utility and erase an 8GB SDCX card (XC for the speed) After which I just had click the repair option in Disk Utility. Now select the Lion DMG as source and drag the SD card as destination. After about 10 minutes, the SD card was the Lion ESD installer. Then it was even easier: you just have to start the installation, and follow the on screen instructions.

To erase the hard drive or restore from a Time Machine backup, you have to boot from the installer; to do so, you have to turn off your Mac and turn it back on while holding Option (alt). When it powers up, you can choose from what drive to boot, you have your Macintosh HD and a Lion specific partition of your hard drive and then you have a USB device, which is actually your SD card. Follow the on screen instructions, and you’re able to erase your hard drive, and put everything back from a Time Machine backup.

Assuming the author of the video has followed the same method detailed by TUAW, the process should be fairly easy and useful to keep a portable copy of Lion that doesn’t live in your file system. Apple has announced at the WWDC keynote that Lion will be distributed only on the Mac App Store at $29.99, as opposite to previous speculation that claimed the company would also offer DVDs and portable USB drives for Lion. It’s unlikely Apple will publish documents to explain to users how to keep a physical copy of Lion (which involves opening the Installer package and finding a DMG file in the Contents folder), still it’s interesting to know there will be the possibility to do everything from Disk Utility as Lion’s Installer is nothing but a wrapper. Check out the video below.