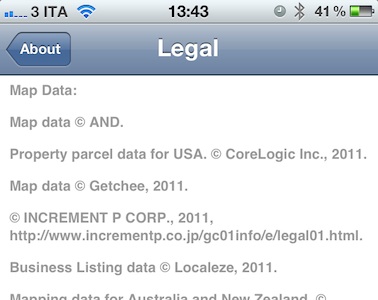 Tipped off by a reader, MacRumors has found that the legal disclaimers in iOS 5 contain new references to a number of third party companies that provide various mapping services. The disclaimers come under a new section called “Map Data” that is not present in previous disclaimers and is completely separate to the section which deals in the disclaimer which deals with licenses used by Google for its mapping service that is used by Apple in the Maps app.

Today’s discovery comes after a number of other revelations, together they form what seems to be the suggestion that Apple is looking (or potentially actively working on) its own mapping solution that could replace Google Maps on iOS. Some of those clues include its acquisition of mapping companies Placebase and Poly9 and its recruitment of employees with navigation software expertise. The location log debacle also revealed that Apple was “collecting anonymous traffic data to build a crowd-sourced traffic database”.

MacRumors had a look into all the companies newly listed in the legal disclaimer and gave a quick description of each of them (included below). Noting two companies in particular that suggest Apple may be developing its own maps service. Urban Mapping provides some extensive additional data such as a wide range of demographic information that can be layed on top of traditional data. Waze, however, is experienced in developing crowd-sourced traffic data - it also has a popular app in the App Store now which demonstrates a lot of their services.

Whilst this doesn’t provide concrete proof of whether Apple is working on its own mapping service, we are fairly sure it (if it exists) will not be launching with iOS 5. This is likely related to the fact that Google recently renewed its agreement with Apple to provide Google Maps to iOS.

Jump the break to see some screenshots of the new legal disclaimer which features these new companies. 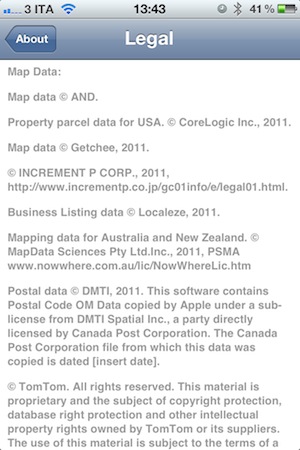 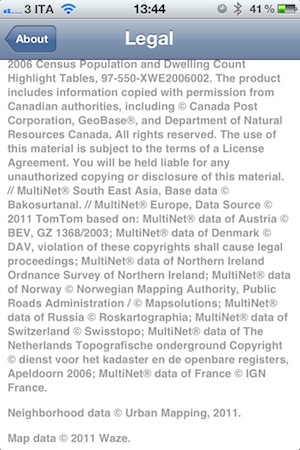